Fred Titmus, a prolific all-rounder for Middlesex and England, died in March 2011. Wisden Cricketers’ Almanack  looked back on a career of remarkable longevity.

Fred Titmus began his first-class career when Clement Attlee was in office and ended it during the premiership of Margaret Thatcher; his career outlasted seven other Prime Ministers in between. To play in five decades was remarkable enough; to finish his first-class career with 2,830 wickets and 21,588 runs – on 16 occasions he claimed more than 100 wickets in a summer, and he performed the double eight times – even more so. As an all-rounder in county cricket, he breathed the same air as the very best, while in 53 Tests he was never less than tough and resourceful. 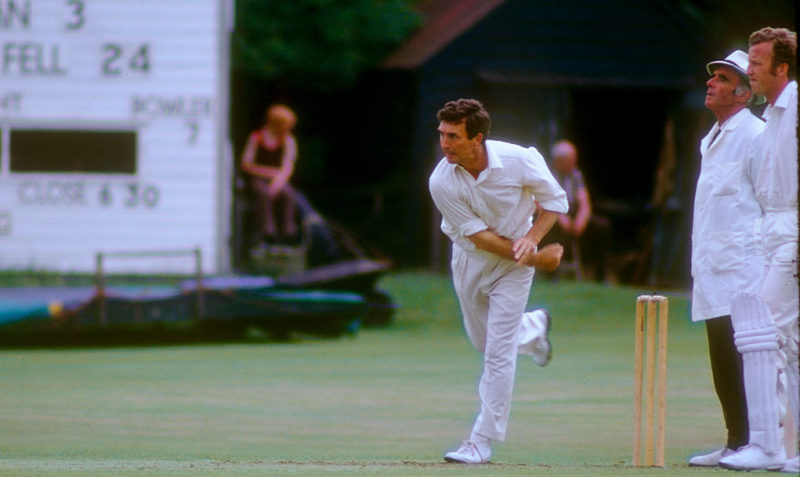 Although a good enough batsman to open against Australia in an emergency, it was as an off-spinner that Titmus made his reputation for Middlesex and England. He began as a seam bowler, which is perhaps why he was feared not for extravagant turn but for his mastery of flight and drift and the subtlety of his variations – including his very own swinger, a delivery bowled from the index finger that began outside leg stump before moving back to trap scores of unsuspecting batsmen in front.

He loved to immerse himself in a long spell, building pressure, restricting scoring opportunities and patiently awaiting his moment. Operating from the Pavilion End at Lord’s, he would hitch up his trousers, blow into his right hand and jog in off a couple of paces, usually with his great mates John Murray behind the stumps and Peter Parfitt at slip.

Short, dapper, with thick black hair, luxuriant eyebrows and a Chaplinesque gait, Titmus was quick-witted, opinionated, blunt, sometimes caustic and never lost for a word – John Warr said he would take a catch in mid-sentence. There was romance in his Middlesex debut, against Somerset at Bath in 1949, and in his improbable finale in 1982, when he was press-ganged into playing Surrey while on a social visit to Lord’s.

He wrote to Lord’s asking for a trial, and bowled only 12 balls before being offered the chance to join the groundstaff

But it was not a career free of setbacks, the most serious coming in the Caribbean in 1968 when, in a freakish motorboat accident, he lost four toes. Less than three months later, he was bowling again for Middlesex, even if his international career did not make such a speedy recovery. He had been England’s first-choice spinner for much of the 1960s but, with Ray Illingworth, another off-spinning all-rounder, becoming captain in 1969, he did not regain his place, apart from a brief comeback in Australia in 1974-75, when he was 42.

Titmus was born in Somers Town, St Pancras, the son of a railwayman. At school he was a talented footballer who took up cricket only after discovering how his Arsenal idol Denis Compton spent his summers; Titmus played at junior level for Chelsea and Watford.

In early 1949, while working in a solicitor’s office, he wrote to Lord’s asking for a trial, and bowled only 12 balls before being offered the chance to join the groundstaff. He was supposed to sell scorecards at the Test against New Zealand in June when, with Middlesex shorn of five regulars on international duty, he was selected to play at Bath. His whites were in the wash, so kit had to be borrowed. An inauspicious debut it may have been, but he became the county’s youngest player, at 16 years 213 days, a record that stood until Steven Finn’s debut in 2005. 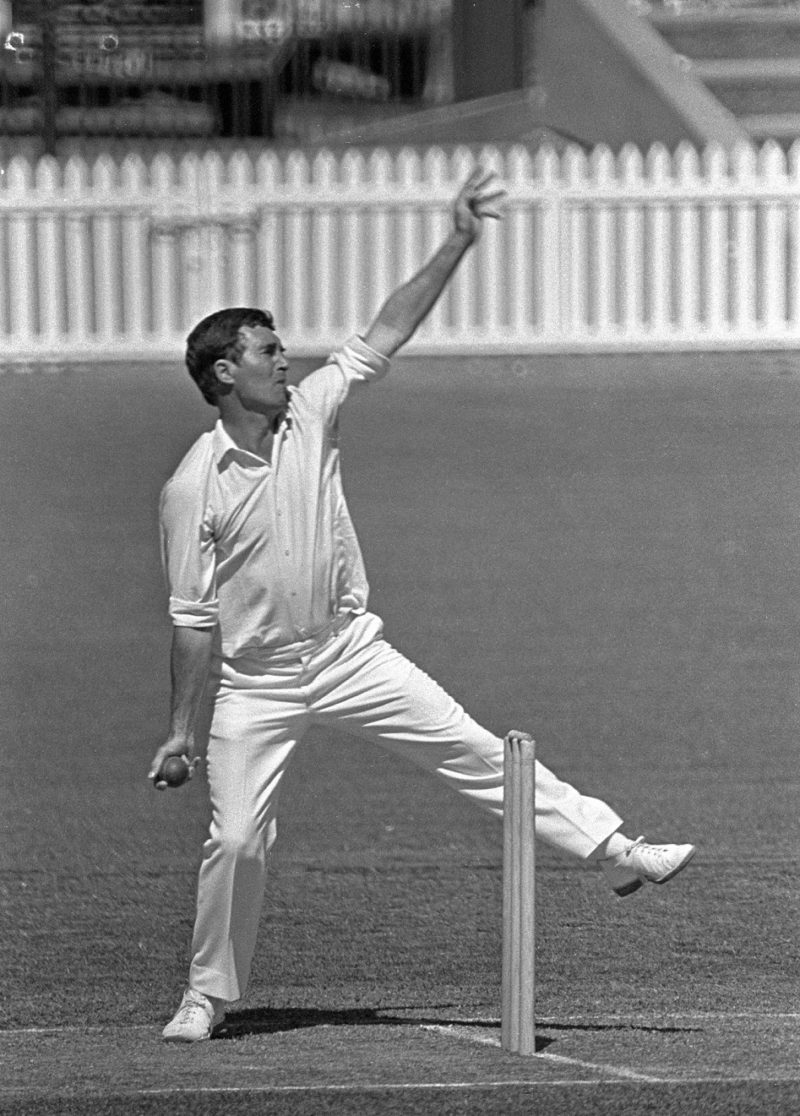 There were more regular appearances the following summer, and the most widely quoted story about him emanates from his first official appearance at Lord’s, for MCC against Surrey in 1950. In an effort to clarify that he was a professional not an amateur, the public-address announcer corrected a scorecard error: “For F. J. Titmus, read Titmus, F. J.”

The story, probably true, has come to epitomise the absurd nature of cricket’s class divide, but Titmus later said such changes were common: “That itself was progress from the old days, when amateurs were denoted by ‘Mister’ and we were generally referred to simply by our surname.”

After National Service in the RAF, he returned to Middlesex and enjoyed the first of his 100-wicket seasons in 1953. His first Test call came against South Africa in 1955 but, after taking one for 50 at Lord’s, none for 51 at Old Trafford and making 39 runs in four innings, he was discarded. It would be seven years before his next opportunity.

"He was very much a man for the basic principles. Better than anybody I know, he understood the bowling action"

But his self-confidence was not dented, and 1955 was his most successful year: 191 wickets and 1,235 runs. He also profited enormously from a conversation with Jim Laker, who had spotted that his delivery stride was still that of a seam bowler, and therefore too long. “A shorter stride would help him pivot more pronouncedly, give him better flight and consequently more variations,” Laker said.

Bowling wicket to wicket, Titmus was a model of economy, while his natural drift was such that Clive Lloyd thought it wise to treat him as a conventional outswing bowler. He shrewdly employed flight, sometimes delaying his action for a fraction of a second to aid the deception.

In 1956, Murray took his first catch off him. They quickly became an effective combination on the field and inseparable off it. In his rare troughs, Titmus always sought Murray’s advice. “We would go to the nets and he’d say, ‘Is my arm too low?’ or, ‘Am I getting too square?’ He was very much a man for the basic principles. Better than anybody I know, he understood the bowling action.” 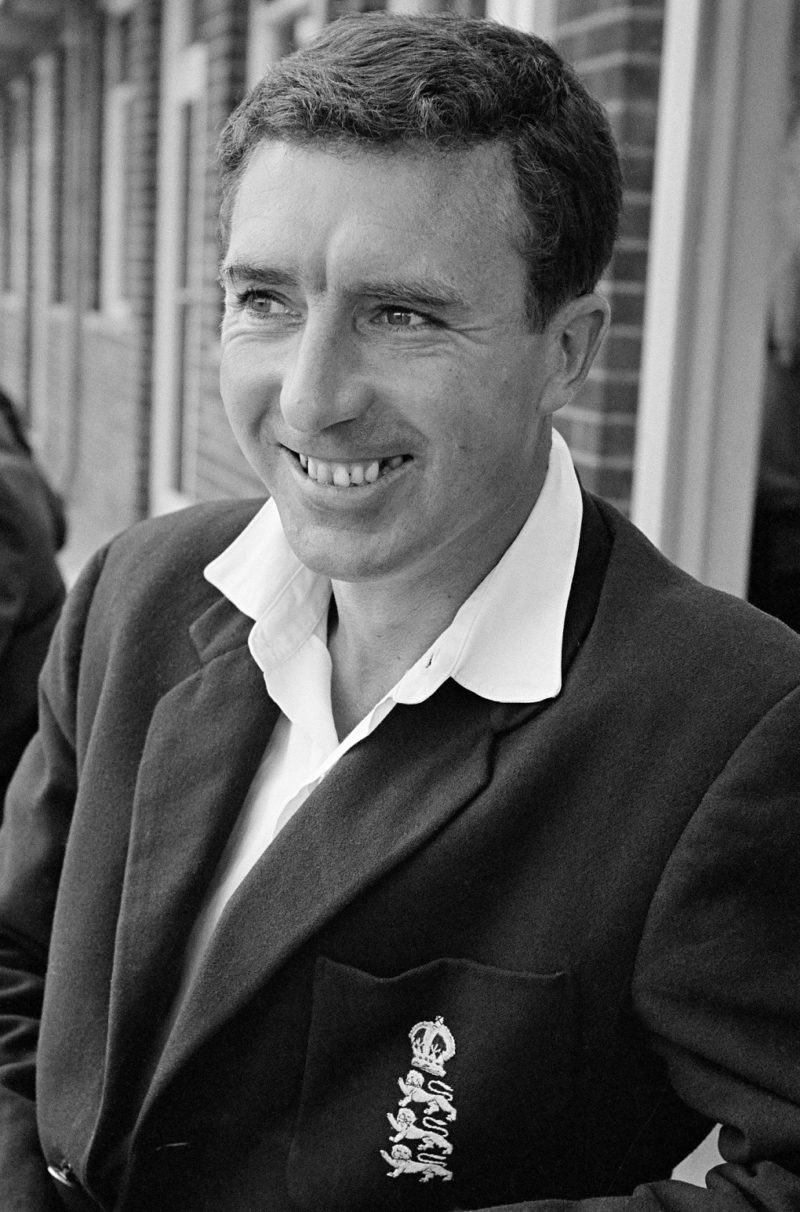 Fred Titmus during the third Test between England and New Zealand at Headingley, July 8, 1965

There was a clutch of talented off-spinners waiting to succeed Laker – David Allen and John Mortimore at Gloucestershire and Ray Illingworth at Yorkshire. “All were fine practitioners, but I always believed Fred Titmus had the edge,” Laker said.

Titmus played in two Tests against Pakistan in 1962, and 136 wickets that summer persuaded the selectors to take him to Australia. Seizing his second chance, he showed particular relish for Sydney: he exploited a cross-wind to take 7-79 in the Third Test, and 5-103 when the sides returned for the Fifth. He was England’s leading wicket-taker in the series with 21 at 29, and also contributed 182 runs. E. M. Wellings called him “the most important member of the team”.

In India the following winter, he took 27 Test wickets – including nine at Madras – as well as making his highest Test score, 84 not out, at Bombay. And in South Africa in the winter of 1964-65, he and Allen bowled England to victory at Durban in the only decisive result of the series.

Titmus was frequently more successful overseas but, against New Zealand at Headingley in 1965, he took four wickets without conceding a run in his 21st over. He was an automatic selection for a second Ashes tour in 1965-66, and once again he starred at Sydney, sharing eight wickets with Allen in the second innings. “He always wanted to bowl with the wind,” Allen said. “But then he would turn to me and complain about how it hurt his eyes when he walked back to the start of his run-up.”

He was vice-captain in the West Indies in 1967-68, but his trip ended abruptly when he was one of a group enjoying a day on the beach in Barbados before the Third Test. Several players were hanging on the side of a motorboat piloted by Penny Cowdrey, the England captain’s wife. Unaware that its unusual design meant the propeller was in the middle, Titmus allowed his legs to rise towards the hull.

Two toes were sliced off and two left dangling, but he had the good fortune to be treated by Dr Homer Rogers, a Canadian surgeon with experience of dealing with foot injuries suffered by ice hockey players. Rogers reassured Titmus that, because his big toe had been spared, he would be able to play again.

Sure enough, he was back in action little more than two months later, at Derby on May 3; initially bowling in crepe-soled shoes, he took 111 wickets that summer.

"He was gutsy, determined and brave"

He was Middlesex captain – the first professional to do the job full–time – from 1965 to 1968, but his tactical appreciation was not matched by his man-management. As vice-captain under Mike Brearley from 1971, he remained an essential component of the side. “He was our key bowler,” said Brearley.

Few would have forecast a return to international duty, but he was included in the squad to defend the Ashes in Australia in 1974-75. “I suppose it’s because I have just kept on bowling,” he said. He took only seven wickets in four Tests, but there was an unexpected batting triumph against the hostility of Lillee and Thomson at Perth, where he made 61, England’s highest score in the match. He got resolutely into line or moved across to allow bouncers to pass over his left shoulder. “He was gutsy, determined and brave,” said Brearley. His Test career ended with 153 wickets at 32.22 and 1,449 runs at 22.29.

In his final full season, in 1976, he was sometimes kept out of the team by the emerging John Emburey, but he returned in August to play a key part in a charge that earned Middlesex their first outright Championship since 1947. Titmus became coach of Surrey (and played one match for them in 1978), but did not enjoy the pressures and after two years retired to run a post office in Hertfordshire.

He made brief returns for Middlesex in 1979 and 1980, but another appearance was not on his mind when he arrived at Lord’s on the morning of August 25, 1982, the first day of the match against Surrey. Middlesex had Emburey and Phil Edmonds but it was Clive Radley who, on inspecting the pitch, told Brearley: “We’ve got to get Fred to play.” The PA announcer was kept waiting for the team-sheet while kit was found and – three months from his 50th birthday – Titmus made his 792nd and final first-class appearance, taking three wickets to wrap up victory on the final afternoon.

He had a spell as a Test selector in the 1990s, but it was an unhappy experience, and he was more content at home in Potten End, rising at 4 am to pick up the newspapers and often delivering them himself. Once he was knocked off his bike by a post office van and, writhing in mock agony, ripped off his shoe and sock. Pointing to his disfigured foot, he shouted at the ashen-faced driver: “Look what you’ve done.”