At the start of the 1997 Ashes series, Glenn McGrath was a new name to English fans – by the end of the summer they knew all about him, and he was a Wisden Cricketer of the Year the following spring.

Friends who were there recall a day last year, deep in the Queensland bush “out the back of Longreach”, on a pig-shooting weekend with the man they call “Pigeon” and the cricketing world knows as Glenn McGrath. The tall fast bowler had spotted a large boar, and he disappeared into the bush in hot pursuit. Three shots were heard, and McGrath came loping back into view, reached into the four-wheel drive, said “Out of ammo,” and loped off again, all, at the same relentless, steady pace. He got the pig. It is a story many who have played against him will recognise uneasily; wild boar or batsman, Glenn McGrath tends to get what he is hunting.

He was demonstrably the best quick bowler on either side in the Ashes series of 1997 and, but for the presence of one Shane Warne, could claim to be the best bowler of all; indeed, it is a claim he might make anyway, if he were a different kind of man. To do so, though would be big-noting and, where McGrath comes from, there are few greater sins.

Glenn Donald McGrath was born on February 9, 1970, in Dubbo, New South Wales, first of three children of Kevin and Beverly. He carries on the great Australian bush cricketing litany, most famously represented by Sir Donald Bradman, and movingly depicted in Sir Russell Drysdale’s painting of two bush kids playing against a stone wall in the sombre ochre of the Australian outback. Dubbo is a wheat and sheep farming centre a couple of hundred miles north-west of Sydney, not quite the real bush, but McGrath’s father farmed in a succession of tiny settlements outside Dubbo with names smelling of gum-leaves: Eumungerie, Galgandra, Narromine. It was at the last that the young Glenn went to primary and high school, and where he started to play cricket. 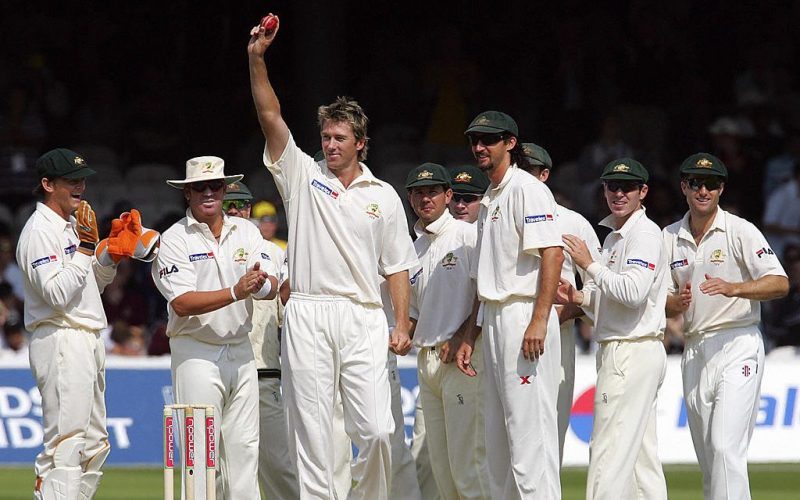 McGrath recalls that there was only one turf wicket available; concrete was more usual. He was on the fringe of the game, and says that he only started to take the sport seriously when he was about 15. His captain in the local club side “thought I couldn’t bowl”. The captain’s name is Shane Horsborough and, says McGrath, “he still reckons I can’t bowl”. You get very little chance to become big-headed in the Australian bush. Still, someone thought he could bowl because, at 17, he was picked in the NSW Country Cup. It was then he was spotted by various good judges, above all Doug Walters.

At 19, at Walters’s instigation, McGrath moved to Sydney and the Sutherland club. Odd jobs and living in a caravan followed, and four seasons of weekend cricket, until, in January 1993, he was selected for New South Wales against Tasmania. He took 5 for 79, and was away. By November, he was playing his first Test, against New Zealand at Perth: three wickets for quite a lot. 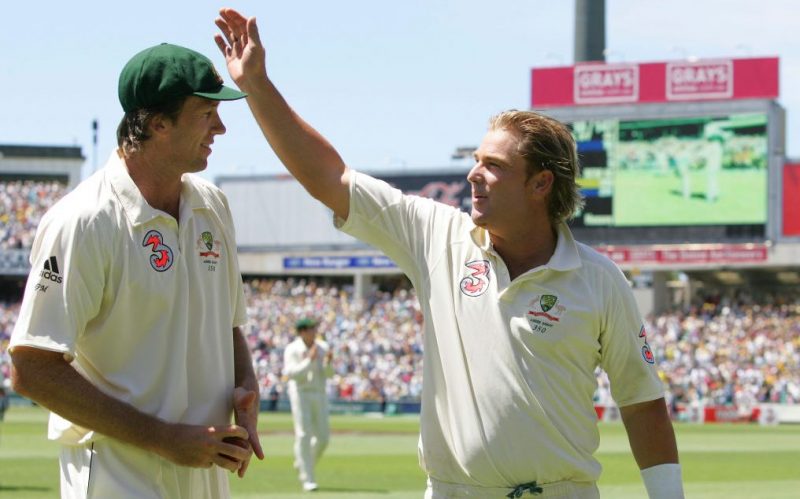 McGrath (left) and Warne bagged 352 Ashes wickets between them

Since then, he has become Australia’s strike bowler, with Warne. At the end of 1997, McGrath had 164 wickets at the remarkable average of 23.43 from 36 Tests. It is a figure very close to the man upon whom McGrath has based his career, Dennis Lillee, whose 355 Test wickets came at 23.92. Of those Australians who have 100 or more Test wickets, the only quicks with better averages than McGrath are Lindwall, Miller and Davidson. In four series completed in 1997, McGrath took 82 wickets: 26 at 17.42 in five home Tests against West Indies; 13 at 22.23 in three against South Africa away; 36 at 19.47 against England in the Ashes series; and seven at 18.28 in one Test against New Zealand before he was injured.

He arrived in May with a huge reputation, especially after his feats against West Indies, when he had considerably better figures than Ambrose, Walsh and Bishop. Yet, after the first Test at Edgbaston and England’s famous win, people were asking what all the fuss was about. McGrath’s match figures of two for 149 were a fair indication of how he bowled. He failed to understand the nature of that wicket and what needed to be done on it. But he learned, as all the good ones do, very quickly. 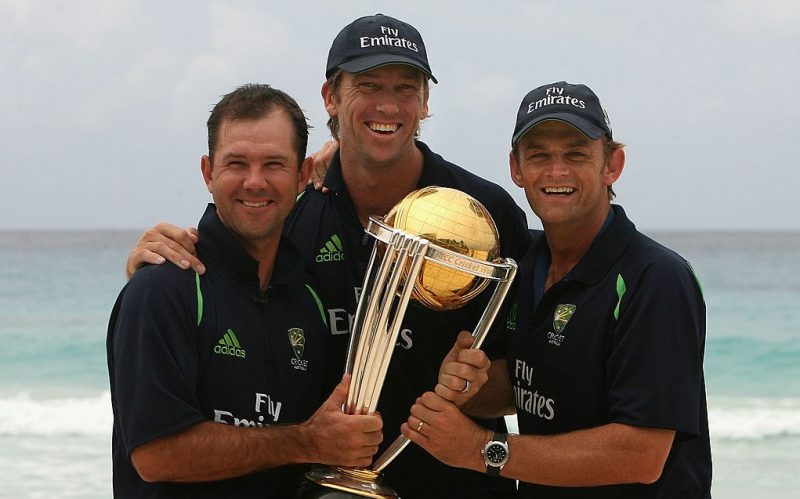 Ricky Ponting, Glenn McGrath and Adam Gilchrist pose with the 2007 World Cup trophy in the West Indies. McGrath bagged 26 wickets in the competition and was named as the Player of the tournament

On a wicket made for line-and-length fast bowling at Lord’s, McGrath had 8-38 in England’s humiliating first innings. The question “Who is this Glenn McGrath anyway?” had been roundly answered. He was integral to Australia’s wins in the Third and Fifth Tests, and took 7-76 in the first innings of a losing cause at The Oval. He was the only Australian quick to play in all six Tests. He had Mike Atherton’s number, in particular, dismissing him seven times. Atherton, in fact, was McGrath’s 150th Test wicket, at The Oval.

There is a thousand-dollar bet in the Australian dressing-room about whether McGrath will make a first-class fifty – ever. Yet he practises his batting with the same purpose he puts into dismissing batsmen or killing wild boars. So far his best attempt is 24. But if determination is going to count, the wise money would be on McGrath. He is a fine outfielder and, if he has a flaw, it is his apparently unstoppable habit of sledging opponents. It is odd, really, because off the field he is a quiet, modest man. He has the odd extravagance: he recently purchased 30,000 acres of wild bush in western New South Wales where he can go to be alone with his mates. Good news for them; tough on the pigs.