The drawn Ashes series of 1972 introduced a new galaxy of Australian stars to English audiences. Greg Chappell, who celebrates his 71st birthday this month, was named a Wisden Cricketer of the Year after making two superb centuries.

The Chappell brothers, Ian and Greg, are destined always to live with the shadow of their famous grandfather, the former Australian captain, Victor Richardson. The key words are ‘live with’ rather than ‘live in,’ as happens with so many sportsmen who follow on from famous uncles, fathers or grandfathers. Ian and Greg are splendid Test cricketers in their own right and Greg Chappell, on the 1972 tour of England, confirmed his place as Australia’s number one batsman. 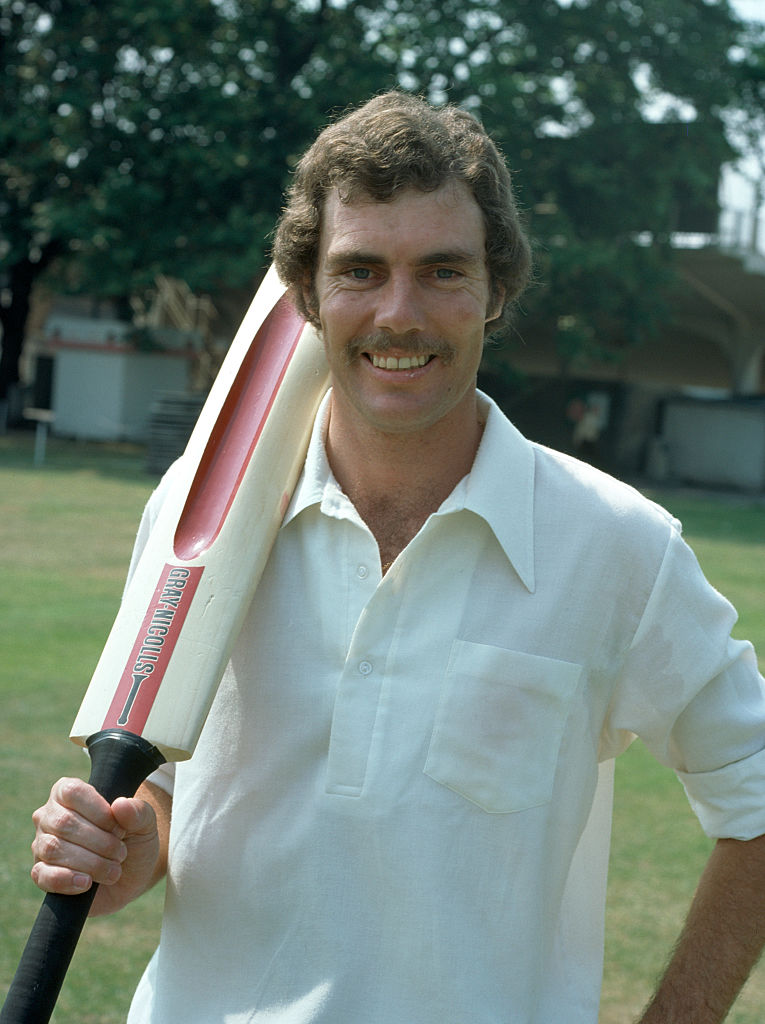 He played two superb innings on the tour, the first at Lord’s in the second Test match where he made a magnificent 131, and the other at The Oval in the final Test where, after two Australian wickets had fallen for 34, he joined his brother in a wonderful 200-run partnership that steered Australia to around the 400 mark in their first innings. Statistically, on the whole of the tour, Greg headed the Australian averages with 1,260 runs in 17 innings, hitting four centuries and three half-centuries.

But bare statistics hold little place in a summing up of those two Test innings. The one at Lord’s can be rated alongside Bob Massie’s bowling as the most vital performance in the whole game – a superbly judged piece of batting that, technically, was beyond reproach. In the five Test matches, Chappell made 437 runs at an average of 48, hitting the two centuries mentioned above plus a half century, and also heading the Australian fielding statistics with eight catches.

Eighteen months before, Greg had made a century in his first Test match against England, the second Test of the series between the two countries played in Perth. This was Perth’s first Test and it was an outstandingly successful performance, very well organised and watched by almost 90,000 spectators. Chappell came in that day with Australia 5-107 and Redpath standing at the other end – when he left the total was 326 and he had completed a magnificent century. That was a good start to his Test career and, although he did not quite keep up the pace for the rest of that series, there was no doubt at all that Australia had found an outstanding player for the future.

Gregory Stephen Chappell was born on August 7, 1948, at Unley in South Australia, the second son of Martin and Jeanne Chappell – the latter the daughter of Victor Richardson. An early education at St Leonard’s Primary School was followed by secondary school at Prince Alfred College in Adelaide. He joined the Glenelg Club whilst still at school in 1960 and has played for them ever since. His first Sheffield Shield match was for South Australia against Victoria in the 1966/67 season, under the captaincy of Les Favell who, in that game, hit 90 and 118 against the traditional Victorian rivals. This was while Greg’s brother, Ian, was in South Africa with the Australian side, so the middle Chappell did not have the pleasure of making his debut with the older brother.

Later, in the 1972/73 season in Australia, both older brothers were playing for South Australia when the youngest brother, Trevor, made his debut against Queensland, hitting a meritorious 67 in difficult circumstances.

An interesting point about the three Chappell brothers and their grandfather, Victor Richardson, is that, as far as can be ascertained, all four of them hit a half-century in their debut matches in Sheffield Shield cricket in Australia. Victor Richardson is listed as making 51 not out, Ian Chappell 59 against a Victorian attack led by the Test bowlers Ian Meckiff, Colin Guest and Alan Connolly, Greg Chappell 53 and 62 not out in the above-mentioned match in 1966/67, and Trevor Chappell the half-century against Queensland. 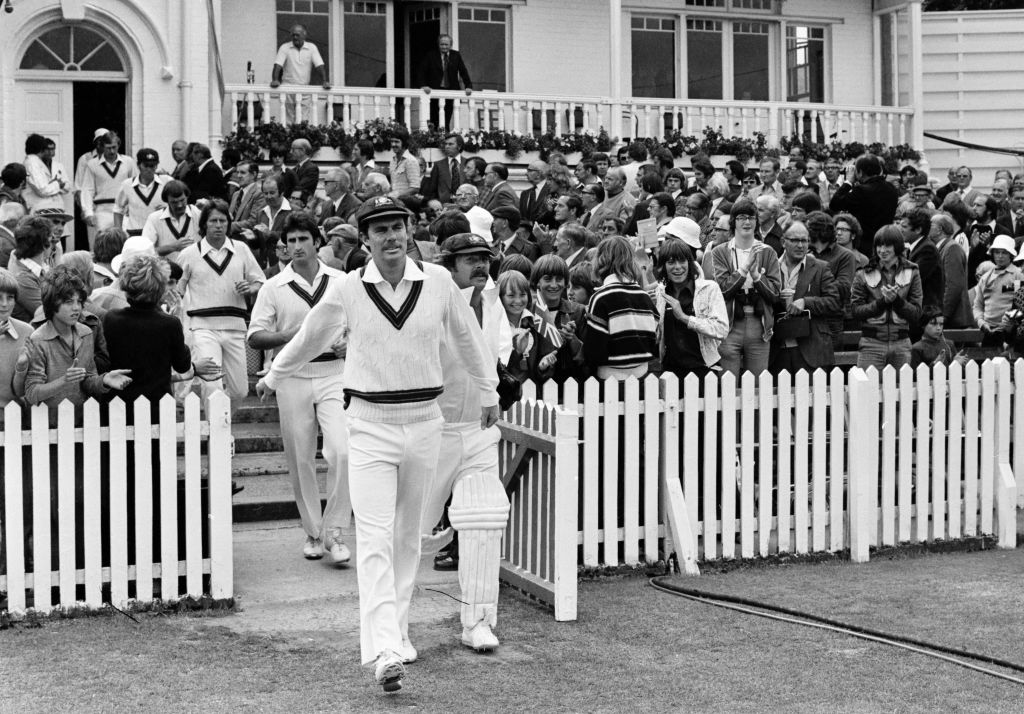 Greg Chappell went on to make 87 Test appearances, 48 of them as captain

There is a touch of irony in that all four Australians this year chosen by Wisden as Cricketers of the Year attribute at least part of their success to have had experience of English conditions. Lillee and Massie give full credit to their stint in Lancashire and Scottish League cricket, Stackpole does the same for his batting experience in the Lancashire League and Greg Chappell was one of the best players with Somerset in the 1968 and 1969 seasons.

Greg Chappell, least of the quartet, had to make any drastic change of technique because of his time in county cricket and, as the 1972 tour went on, so did he improve in strokeplay and stature. “I did not have to make any great changes but I think but I think the key to it all was that a change did develop over the period I was with Somerset. At the same time, there were still things I had to improve on by the time I got across to England in 1972, particularly with the damp start to the season which meant the medium-pace bowlers were cutting the ball off the pitch a considerable amount. It wouldn’t be true to say I had to make any drastic changes but I am certainly grateful for the experience I gained with Somerset for those two years.”

Chappell is one Australian who thoroughly appreciates the problems and the benefits of one-day knockout cricket and he says quite clearly that he believes the limited over game can do cricket the world of good. “I believe it’s a good thing for the public and, after all, they are the ones who have to be entertained and are going to pay their money at the gate. It needs to be kept at reasonable limits, which I think it is in Australia at the moment with Australia’s particular cricket structure.

“Also I believe it’s kept to reasonable limits in England at the present time because, after all, it’s a relative thing and so much more cricket is played in England that they can afford more one-day competitions. I think every cricketer prefers games of longer duration than one day but there is the very necessary thing of taking the game to the public. I believe this is what the players must do and it is up to the players to work out the best way of keeping the public entertained.”

Chappell these days is a promotions officer with the Coca-Cola Bottlers of Adelaide, having previously worked with an oil company and a life assurance firm. All the Chappell brothers came under parental influence with some coaching from their father and from a family friend, Lyn Fuller, and Chester Bennett, the school coach at Prince Alfred College, was also very helpful to Greg in his early days.

Always in the background was the figure of Vic Richardson – not in a coaching capacity – but simply by way of inspiration and the knowledge for the younger Chappells that he had done so well in Australian cricket over the years and his name was something to try and live up to. Greg acknowledges his parent’s interest and great help over the years, particularly when the boys were playing so much cricket that their mother and father had to sacrifice weekends to get the boys to and from cricket matches.

It was all worth it though in the aftermath of the Test series in 1972, where that last Test match at The Oval provided so much good cricket and also gave Greg his second century of the season. He rates that Oval game as his most memorable match, with Australia fighting all the way and refusing to give in. He is a firm believer in team effort and described the 1972 side as “a side with tremendous team spirit, improving throughout the tour”.

The tightening of his technique in the England tour leaves few in any doubt that, for some years, he is going to be the outstanding batsman in Australia

Most critics, however, would say that Chappell’s own outstanding performance was his batting in the Lord’s Test and he would agree that, from the technical and concentration point of view, it was perhaps the innings he has most enjoyed in his cricket career. He makes an interesting point about the Test series in saying that he thinks a drawn series was probably a fair result, for although Australia played well in three of the Tests, they showed a lack of knowledge of how to win games in the light of the Trent Bridge result.

There was a time when Greg Chappell was so strong onside that it was considered poor form not to concentrate round about his off-stump and induce the edged chance to the wicketkeeper or slip. In the space of 12 months, all that has changed. Critics watching his performance against the Rest of the World in the International matches compared him favourably with some of the great players over the years in Australian first-class cricket. The subsequent tightening of his technique in the England tour leaves few in any doubt that, for some years, he is going to be the outstanding batsman in Australia. 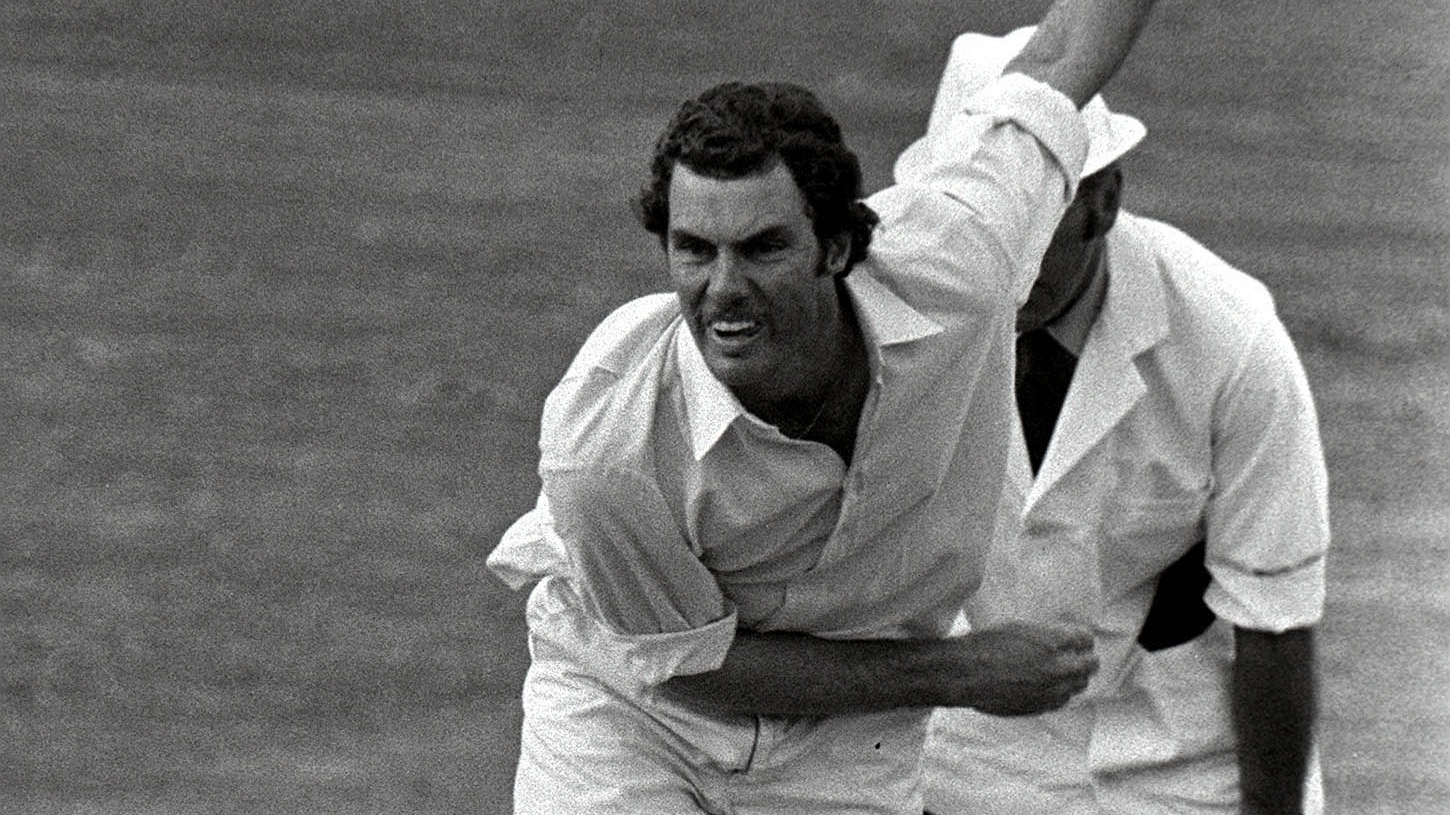 He has also his medium-pace bowling to sway the selectors, if ever they might be in any doubt about his inclusion

He has also his medium-pace bowling to sway the selectors, if ever they might be in any doubt about his inclusion, but these days he bowls less and less. He still has the ability to break through the partnership but the concentration now is on batting and fielding, and in the latter department he has no peer in Australia, either in close catching positions or away from the wicket. When the 1972/73 season began, he made a classic 129 off the New South Wales attack in the first game of the season in Adelaide, followed it with 77 against Queensland in effortless fashion, and then made 75 not out and 35 against NSW in the return game and another 77 against Victoria.

He is one of the new young breed of Australian cricketers who have the intense desire to see Australia back on top in international cricket. His first experience of Test cricket was to be in a losing side in a series against England, and this at the end of a disastrous five years of Australian cricket. Chappell has been part of the fight back in a team well led by his brother and with a younger brother coming along in splendid fashion in Australian first-class cricket at present. It could well be a family affair by the time England next come to Australia.