Misbah-ul-Haq was a surprise choice to lead Pakistan on their 2016 tour of England, but he proved to be an outstanding captain. He was named a Wisden Cricketer of the Year the following spring.

In January 2017 at the SCG, after Misbah-ul-Haq had finished his last press conference on the tour of Australia, he was pursued by a gaggle of Pakistani journalists. One of them wanted to ask a question that had escaped his mind earlier. Misbah, who had just presided over a 3-0 Test defeat, turned around and asked him to fire away. “How,” the journalist wondered, “did Pakistan fall so far, from No. 1 to 5, in just three months?” Without breaking step, or pausing for breath, Misbah replied in Punjabi and a pop-philosophical vein: “If a man who has lived for 70 years can suddenly die one day, what’s a team falling from the ranking in three months?”

Sydney was Pakistan’s sixth Test defeat in a row, five of them under Misbah. Yet, only during the course of that Australia series had the fog cleared: it had been a series too far for Misbah – and for Misbah’s Pakistan. Maybe three too far. With hindsight, the golden haze of an August afternoon at The Oval – where he joked with Alastair Cook about wanting a fifth Test – was their zenith.

Pakistan’s ten-wicket win over England to secure a 2-2 draw came in front of an adoring crowd, at the scene of one of Pakistan’s greatest early triumphs. It was August 14, the anniversary of the country’s founding. As the Test played out, it became a tribute to the passing, in July, of one of Pakistan’s greatest men, the humanitarian Abdul Sattar Edhi, and one of its greatest openers, Hanif Mohammad, who had died on the first day. A week later, Pakistan would become the top-ranked Test side – only six years after losing the spot-fixing Test at Lord’s, when they were sixth in the rankings and much further down in the rankings of goodwill.

In fact, it was the England trip that had promised to be a tour too far. Misbah had not appeared for Pakistan since they defeated England in Sharjah in November 2015, and had played no first-class match in the six months before they arrived.

In May, he had turned 42. For a few months he contemplated retirement. He had failed to secure a short-term county deal, but instead got the best preparation for a tour a modern Pakistan team have ever had. It began with an old-school boot camp at the army academy in Kakul, Abbottabad – Misbah emerged as one of the fittest of the intake – and was followed by a short skills-based camp in Lahore, then acclimatisation in Hampshire. As it was Ramadan, most players were fasting, but there was no let-up on training. “Fitness was at such a high,” says Misbah. “That really helped us. As a challenge of fitness, Test matches were pretty easy.” 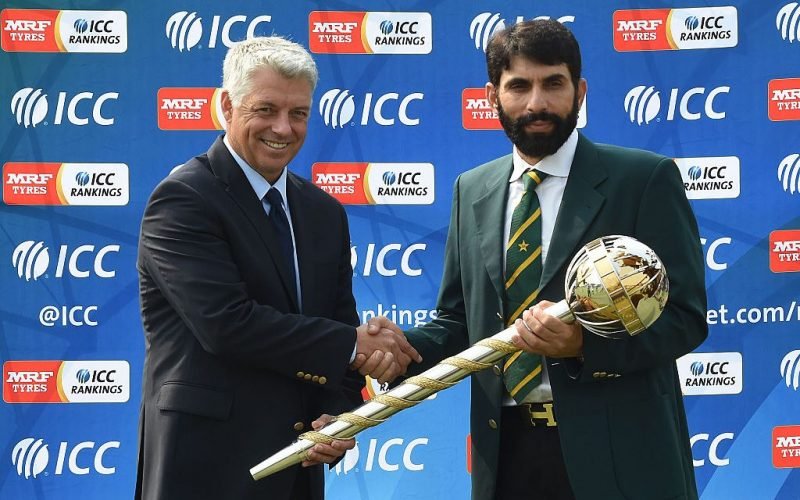 Misbah-ul-Haq Khan Niazi was born in Mianwali, on May 28, 1974. On the cusp of Punjab and Khyber Pakhtunkhwa (once part of the latter, it now comes officially under the former), Mianwali is the ancestral home of another Niazi, Imran Khan. The two share little but a vast tribe. Nothing in his early years presaged the extraordinariness of Misbah’s career. He grew up in conventional circumstances, the youngest child and only son of two teachers. He took to many sports, especially hockey, football and snooker – interests frowned upon by his father.

In the end, Misbah acceded to, and disobeyed, his strictures: he settled on cricket, but only after completing a university education. Until then, he had roamed the streets as a champion tape-ball batsman. Once he began in earnest, he rose swiftly, but not always smoothly: for 11 years after his first-class debut, he would remain more out than in at international level.

Such was the character of the side that his faith in his players and their preparation never wavered.

With Pakistan scrambling around in 2010 for a fifth Test captain that year, the PCB chairman Ijaz Butt met Misbah – recently discarded as a batsman – in great secrecy, in a clerk’s room at board HQ in Lahore. Misbah received an offer, while being reminded there were no other candidates around; for a while, he didn’t tell even his wife. Few are the great sporting careers that begin properly at 36. In six years, he turned Pakistan into an image of himself: head-down focus, unquestioning commitment, deep discipline. But he knew how to let his hair down, equalling Viv Richards’s then Test record 56-ball hundred, against Australia at Abu Dhabi in 2014 – the second of three successive centuries.

Last summer was the high-water mark, even if he prefers the 2011/12 clean sweep of England in the UAE: “They were No.1 at the time, and 2010 was still fresh in everyone’s minds.” In his first Test innings on English soil, at Lord’s in July, Misbah set the tone: Pakistan were here to win matches and influence people. He came in at 77-3, and might have been dismissed three times before reaching 20.

But he ended up playing as well as he can recall, going on to a five-hour century: “If you take in the whole scenario – the history of the ground, the fact that I’d almost retired, 2010 – it was probably the top innings of my Test career.” To celebrate, he provided the image of the summer, possibly the year –an impromptu set of ten push-ups, in gratitude to the soldiers who had helped with training. “It was a really emotional game for us,” says a man defined by his own lack of public emotion.

After that, his leadership took over. Pakistan’s defeat at Old Trafford was comprehensive, and their late demise at Edgbaston spirit-sucking, though Misbah did his best with a fighting half-century in both. But such was the character of the side that his faith in his players and their preparation never wavered. There was, he says, a rare “energy” in the squad – an energy he helped generate.

Victory at The Oval confirmed as much. He had also instigated an off-field PR coup by on-field deed. This was Pakistan’s first non-rancorous tour to England in 20 years. The attention, he knew, would be fierce, but it couldn’t be as fierce as the 2011-12 series, when he underwent some of the toughest media interactions of his career. “We knew we had controlled these things this time,” he says. “After six years of this side, we had no issues off the field, so I was confident nothing would happen.” Nothing, that is, other than magic.

Misbah retired as Pakistan’s most successful Test captain, leading them to 26 wins from 56 Tests. He aggregated 5,222 Test runs at 46.62, including 10 hundreds.