In the summer before the sensational emergence of Shane Warne, leg-spin bowling was thought to be almost extinct. No wonder the promise of Ian Salisbury, a young English exponent, was rewarded with a Wisden Cricketer of the Year award.

If last summer’s leading candidate for the time capsule was the elegant cover drive David Gower unfurled at Old Trafford to become the leading English Test match run-scorer, the most consistently evocative delights came courtesy of another south coast anachronism. In the course of taking 87 first-class wickets with his leg-breaks, moreover, Ian Salisbury of Sussex became the first specialist leg-spinner to play for England in 21 years. On that same Thursday morning in June, odd-looking birds with snouts and curly tails were reportedly sighted flying over St John’s Wood.

The spinner, or so decrees one of cricket’s Ten Contemporary Commandments, emergeth not from the chrysalis until he hath entered his fourth decade. Philip Tufnell first defied the law in 1990, and in 1992 there was blasphemy aplenty: no fewer than seven slow men from the shires aged between 22 and 28 took 50 first-class victims or more. High of arm, supple of wrist and boundless of spirit, Ian David Kenneth Salisbury was one of the youngest and the most productive.

He is a rarity in more senses than one, belonging to the exclusive quintet of Northamptonshire-born players who have represented England (after C. T. Studd, Arthur Mold, George Thompson and David Capel). Born in Northampton on January 21, 1970, the slim, flaxen-haired Salisbury attended Moulton Comprehensive, where cricket had no place on the curriculum, leaving him to learn the rudiments at his father’s village club in Brixworth. 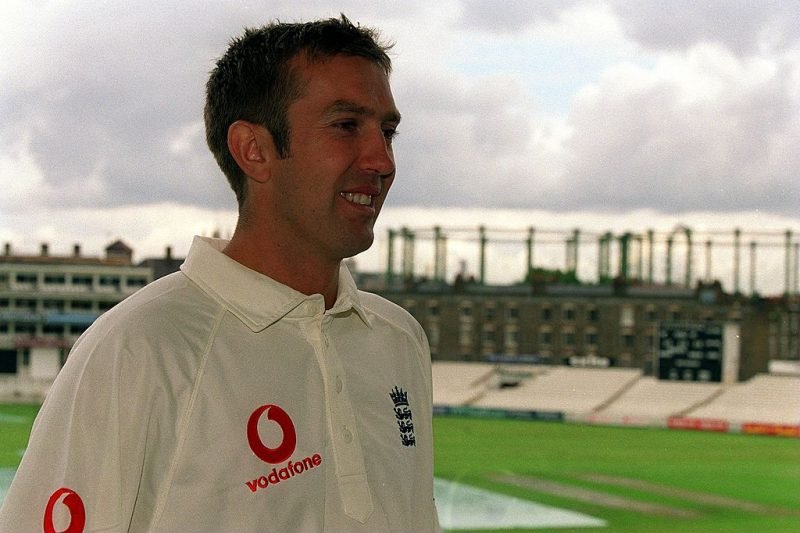 In a first-class career that spanned 19 years, Salisbury claimed 884 wickets

He played soccer in midfield for the Northamptonshire Schools team but, urged on by John Malfait, a local man and a staff coach at Lord’s, he also found himself picked for the County Second Eleven in 1987, as a batsman.

At the time he bowled a few leg-breaks as a sideline and he was encouraged to bowl more in the nets by Andy Roberts, another local boy who was already on the staff as a leg-spin specialist. But Robert’s presence meant that Northamptonshire had no special reason to encourage Salisbury or – when his batting failed to develop significantly – take him on as a full-timer.

Instead, he joined the MCC groundstaff. It was there, under the wing of Don Wilson, that his bowling improved enough to win him a contract with Sussex. They also had another leg-spinner, Andy Clarke. But Clarke was essentially a defensive bowler, and this time it was Salisbury who survived. At Hove Norman Gifford advised him how to adapt to different pitches; and when he spent the winter of 1989-90 playing club cricket in Zimbabwe, the sleepy surfaces of the Harare Sports Club made Salisbury learn the value of precise line and length and variety of attack.

Recognition was remarkably swift. He was picked for the England A team in the next two winters, improved steadily and in the West Indies in early 1992 was regularly dismissing front-line batsmen. Unafraid to entice the eager-footed forward, he doubled as stock and strike bowler from a gentle bobbing approach. Even so, his inclusion in the 13 for the first Test against Pakistan three months later was decried in certain quarters as a marketing gimmick rather than a statement of intent, all the more so when the selectors dropped him from the final eleven, after the opening day was washed out and they changed their stated plans.

To their credit, they really did pick him for the next Test at Lord’s and Salisbury flourished before an enchanted Saturday gallery. When Javed Miandad, arguably the world’s finest player of spin, groped at a perfectly pitched leg-break, the ball looped up to kiss the shoulder of the bat and Ian Botham brought off a spectacular slip catch. “It was not so much a feather in a new cap,” exulted Scyld Berry in the Independent on Sunday, “as a head-dress to grace Hiawatha.” It was the first time a specialist wrist-spinner had taken a wicket for England since Robin Hobbs held Rohan Kanhai’s return drive at Port-of-Spain in January 1968.

After bemusing Wasim Akram with a googly, then a sparingly deployed part of his armoury, the debutant despatched Salim Malik, Aamir Sohail and Moin Khan on the Sunday to spur a depleted attack to within two wickets of an improbable victory. The reunion with terra firma was immediate, Miandad himself taking the long handle to this uppity young pup at Manchester. Salisbury now harked back to his cricketing roots, and his resilient half-century dispelled the threat of the follow-on.

He is blessed with the requisite mix of optimism and realism demanded of one who plies such a precarious trade, and it would have been out of character had he felt bitter at his initial exclusion from the senior party to India; he was added to the squad after being sent out only as a net bowler. Sussex’s last two Championship engagements nevertheless produced the aggressive riposte of a man spurned: six for 29 and five for 54 against Lancashire, then seven for 54 (a career-best) and five for 84 against Yorkshire. Opponents were frequently flummoxed by a faster ball. He also felt confident enough to bowl the googly more often. He finished with more wickets than anyone except Courtney Walsh.

Deservedly named Young Cricketer of the Year by the Cricket Writers’ Club, Salisbury, together with his Pakistani counterpart Mushtaq Ahmed, had instigated a romantic revival. If the ailing Bill O’Reilly was reading the scoreboards in the Sydney Morning Herald in the weeks before he died, he would have been content in the knowledge that, against the odds, his art lived on.

Ian Salisbury played 15 Tests for England and finished his first-class career with 884 wickets.