Marcus Trescothick announced his retirement yesterday to the warm affection of everyone in the game. His early struggles to become established were recalled when he was named a Wisden Cricketer of the Year in 2005.

There was a time, in the late 1990s, when Marcus Trescothick was unsure of his place in Somerset’s Championship side. The runs had been coming more reluctantly, a new experience for someone whose still tender career had been aglow with often prodigious scoring. A natural, buoyant opener, he found himself descending in the order, and was starting to wonder if a change of county might help.

People were starting to murmur. Was he carrying too much weight? Did his approach and amiable features suggest he belonged, just a little too willingly, to the relaxed, less than competitive, Taunton ambience? Was his technique – which had served him so handsomely as he topped 1,000 runs for England Under 19 – robust enough? For all that left-handed brio and vigour, usually so exciting to the spectator, he could look vulnerable.

The batsman’s 27th season as a @SomersetCCC player will be his last.👇https://t.co/pFJ3WTI66T

He knew what they were saying: that he needed to tighten his defence, to move his feet more and give the slips less hope as he pursued his boyish flirtations outside the off stump. And he admits now: “My diet was all wrong”. He prefers to airbrush from the record his old nickname of “Banger”, which referred to sausages, not his hitting. (His England team-mates call him, discreetly but boringly, “Tres”.) 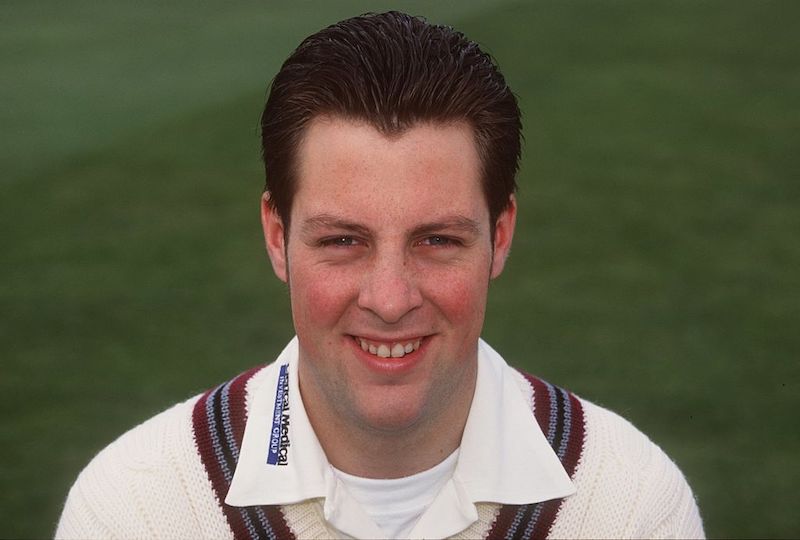 A youthful Marcus Trescothick ahead of the 1996 season

And it is true that a few of those reservations still persist. He will tell you that he hasn’t changed his method that much. He reached a century in Johannesburg seemingly rooted to the spot. But he has built on his positive and instinctive assets. He is an undeniably powerful striker of the ball; he possesses an enviable shot-selection; he stands tall, physically and psychologically, these days for England. Duncan Fletcher, as has been well documented, detected some of those qualities in 1999 when he was looking after Glamorgan and they were playing Somerset. Trescothick cracked a hundred in his own, zestful way.

Still, his metamorphosis is remarkable. His Test and one-day record, since his senior international debut in 2000, reflects many signs of a changing persona – and reassuring confidence at the top of the order. He likes taking on fast bowlers. He bats without fear, occasionally too assured and impetuous when there is an innings to build. But fallibility is part of cricket’s fascination. He has never been cowed by reputation; he demonstrated that when he carted Glenn McGrath for a quartet of fours in an over at Edgbaston during the Champions Trophy in September. In contrast, his (unavailing) 104 in the final was rigidly disciplined: “I really grafted it out,” he says. 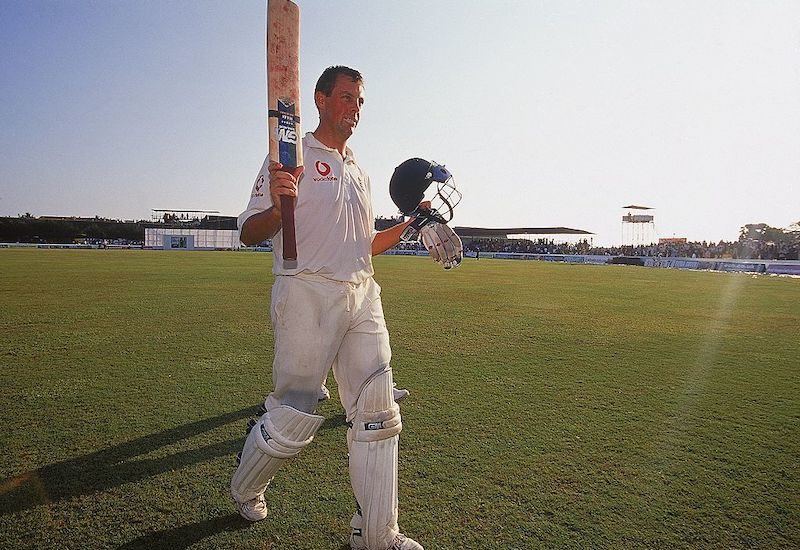 He celebrates his maiden test century during the First Test against Sri Lanka at Galle, Sri Lanka

His ten Test centuries have been equally varied, and his 132 against New Zealand at Headingley in 2004 ranks with his best, beating the two he scored against West Indies at Edgbaston less than two months later. The one to cherish was surely the previous summer’s 219 against South Africa at The Oval, made while he was still smarting from the criticism that he received at Headingley in the previous Test. That was when the umpires offered the batsmen the light with England flaying the bowling and, to general native dismay, Trescothick accepted it. England never regained the initiative.

Partly because of that, one imagines, he has a cool, though polite, relationship with the media. He has few extrovert traits, is inclined to be taciturn and is unceasingly serious and analytical about his game. He is better at dispensing boundaries than headlines. At dressing-room level, he is a strong team man. Colleagues like to have him at the other end, especially when it is the moment to start going for shots.

Marcus Edward Trescothick was born on Christmas Day 1975, and was given his first bat when he was two. Cricket was an obsession in the family. Dad Martyn was opening bat (and regular century-maker), captain and chairman of Keynsham CC; mum Lin made the teas. Marcus, with puppy fat and slogger’s muscles, hit his first hundred aged 11. Somerset coached and monitored him. When one of their junior sides didn’t have a place for him, he played for the opposition and scored a century. His friends worked out that when he was 15, turning out for school, village and any other matches going, he actually scored 4,000 runs in a season.

He has few extrovert traits, is inclined to be taciturn and is unceasingly serious and analytical about his game. He is better at dispensing boundaries than headlines

Somerset’s supporters quickly took to Marcus and liked to see him going out to bat with Mark Lathwell, a partnership sadly not to be sustained. Equally sad for them is the fact that Trescothick did not play a single Championship match for the county last summer. His affection for his native team remains strong. He was vice-captain under Jamie Cox and several times led the county. There are sentimental reasons why he hopes that one day, when his international career winds down, he can become Somerset’s captain. That would offer the perfect sense of symmetry to his career.

Some pundits argue that he is better equipped technically to be a one-day player. “I enjoy both games equally,” he says. “It’s simply that you hit the ball in different areas for limited-overs cricket.” Another “pundit”, Shane Warne, implied that the Aussies would find him out in the Test matches, a psychological throwaway that Trescothick pondered in eloquent silence. He doesn’t give much away, and remains happiest when parading his potent repertoire of shots, his occasional medium-paced seam, deputy wicketkeeping… and taking over from time to time as England’s skipper. That leaves him fewer hours than he’d wish to spend with his wife Hayley and his close-knit family, or on the golf course.

This article was published in the 2005 Wisden Cricketers’ Almanack. Later that year, Marcus Trescothick would play a key role in England’s triumphant Ashes series but would be seen for the last time in an England shirt in 2006, owed to a stress-related illness – recalled in his candid autobiography, Coming Back to Me – which led to his official international retirement in 2008.

Trescothick scored 5,825 Test runs at 43.79, including 23 centuries. He has contributed 26,234 first-class runs and 66 centuries thus far for his beloved Somerset. He will retire from professional cricket at the end of the 2019 season.