For almost a decade, Matthew Hayden was a prolific and intimidating presence at the top of the Australian order. He reached the peak of those powers in 2003, when he was named a Wisden Cricketer of the Year.

Sometimes in their worthy search for the perfect alignment of talent, technique and temperament, selectors outsmart themselves by overlooking the most fundamental and blindingly obvious virtue a batsman can have: the faculty for making runs. Matthew Hayden was passed over for all manner of training institutions, squads and teams in his cricketing youth, up to and including the Australian Test team, because of a universal suspicion about flawed technique. “It always baffled me a bit, because I always, always had scores on the board,” he said. “It was like I had to win the perception.” When he finally established himself in the Australian team, and was asked by one of his press-box critics what had changed, he was tempted to reply: “Only your mind.” 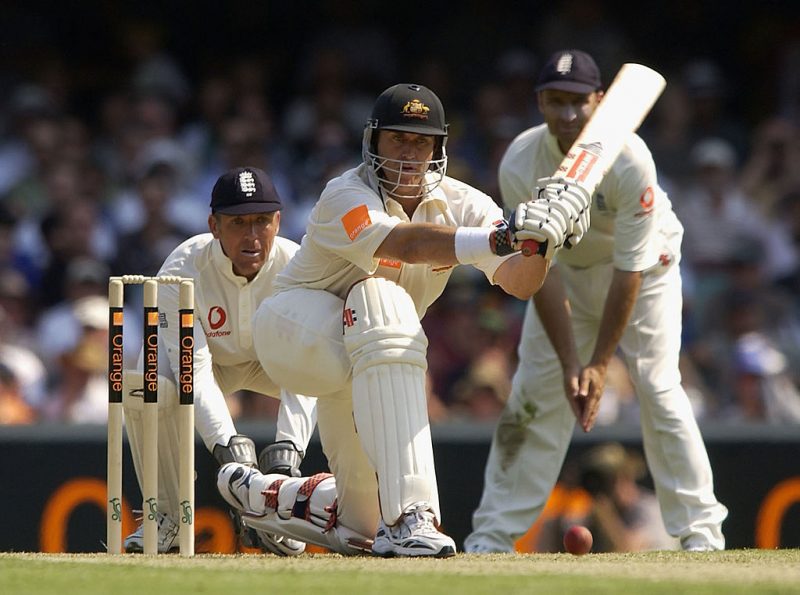 Hayden on his way to a century against England, November 7, 2002

Just one man never, ever wavered in his faith: Hayden himself. By January 2003, when he was ranked the No.1 batsman in the world, he was well placed to thumb his nose at the doubters. But he would not, because he thinks of this peak as a staging-post, not a destination. Although he has never been more content, he is as possessed now as when he was a schoolboy thumping the ball all around outback Queensland. He realised it last Australian summer when given four days off to refresh himself. He went to Stradbroke Island, a favourite haunt, with his wife, infant daughter, surfboard and fishing rod, which along with his bat and his Catholic faith constitute all that is dear to him. When he returned, he was itching for a net. “I just love the feeling of hitting the cricket ball,” he said. “That’s what stimulates me. That won’t ever wane.”

Matthew Lawrence Hayden was born on October 29, 1971, in Kingaroy, land of wide skies, beef cattle and peanuts, home also to Carl Rackemann and the former Queensland premier Joh Bjelke-Petersen, who because of an infamous gerrymander ran the state for two decades and so could be said to be another who was intent on never getting out. The teenage Hayden’s boon companion was his elder brother Gary, who was also his first coach. “He was always amazed at the way I just went out to hit the ball,” Hayden said. “He was all about leaving it. I just wanted to bludgeon the ball everywhere.” In the off-seasons, they did triathlons together.

Hayden went to school and university in Brisbane, and all the while made runs, breaking his club’s scoring record in his first full season and also breaking Greenmount’s record in the Bolton League as soon as he spent a winter in England. He was not picked for a youth tour of England, nor invited to the vaunted academy, but regarded that as a lucky break because he was by then on the threshold of state selection. The day before his Sheffield Shield debut against South Australia in November 1991, when another man might have been worrying about whether he belonged in this company, Hayden asked if anyone had made a double-century on debut. The next day, standing a metre outside his crease and hammering the ball back down the ground as if with a rivet gun, he made 149. “I was thinking that I wanted to be successful,” he said. “That was my mind-set.” 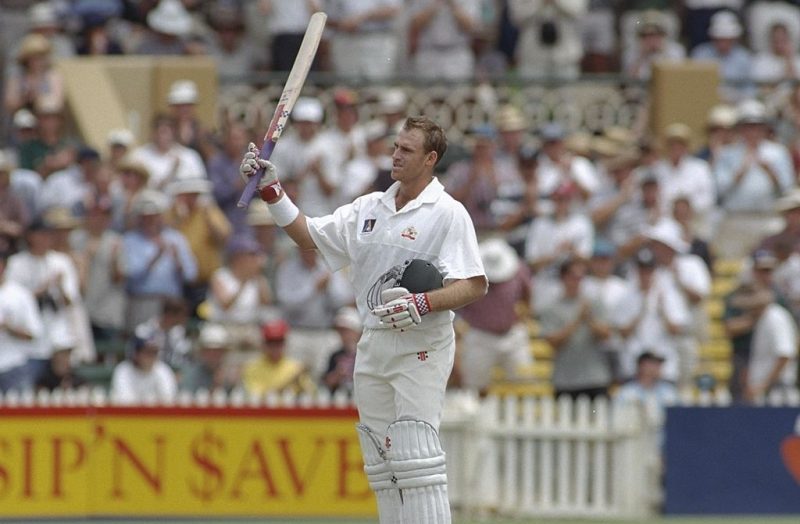 At 21, Hayden toured England and made 1000 runs without playing a Test. It was 1993 and Michael Slater was just establishing himself as Mark Taylor’s opening partner. The next year, Hayden made his Test debut when Taylor was ill on the morning of the Johannesburg match. Early in the second innings, Allan Donald broke his thumb. In the next six years, he played only six Tests, all in the southern summer of 1996/97. So it was that all his first seven Tests were played against the powerful seam attacks of either South Africa or West Indies. It was hardly surprising that his performances were uneven and he could not make a permanent place for himself. He saw this period not as exile, but preparation. “The thing is, you’d have it no other way. Within myself, I knew I was gathering momentum,” he said. “I knew I was good enough, but I couldn’t get the opportunity.” He said he felt frustration, but never despair.

He admitted to quirks in his technique, but no more than any other left-hander. “Even today, if a guy is swinging the ball into your pads, and you’re trying to play straight, it’s really hard to make the adjustment.” Three seasons of county cricket, batting day in day out for Hampshire and Northants, helped refine his method. “The guys were bowling straight at my pads. It’s the way the English bowl: at the pads and stumps and look for the LBs,” he said. “Gradually, it became a strength, to the point now where, if I was to say what was my favourite shot, it would be through mid-wicket, forcing off the back foot. To get anywhere, you have to face your weaknesses.”

His style still was not classical, but it worked. Tall, broad-shouldered and immensely powerful, he did not just occupy the crease, but filled it. He knew from a young age that if he remained patient and played with the full face of the bat, he had the strength to hit boundaries for days at a time. He continued to make runs in epic numbers – an opponent at this time said it was like bowling to a sightscreen – and never lost his inner conviction. “I never thought about what I could or should have been doing, but what it is that I have to do to become a better player,” he said. “Even now, with one-day cricket, it doesn’t stop. I want to become a better player.”

Hayden regained his Test place and his vocation in New Zealand in March 2000. The next year in India, the country of reincarnation, the explosion came. In a series memorable for prodigious feats on both sides, but also for the failure of most of Australia’s batting, Hayden made 549 runs in six innings. An astonishing number came from the sweep, a shot he said he always possessed, but rarely got to play on Australian pitches against Australian bowlers. “I’ve got a big advantage with the sweep because I’ve got a big stride. I can get to the length and sweep on the length,” he said. “Unless it’s a genuinely short ball, you can almost sweep anything.” 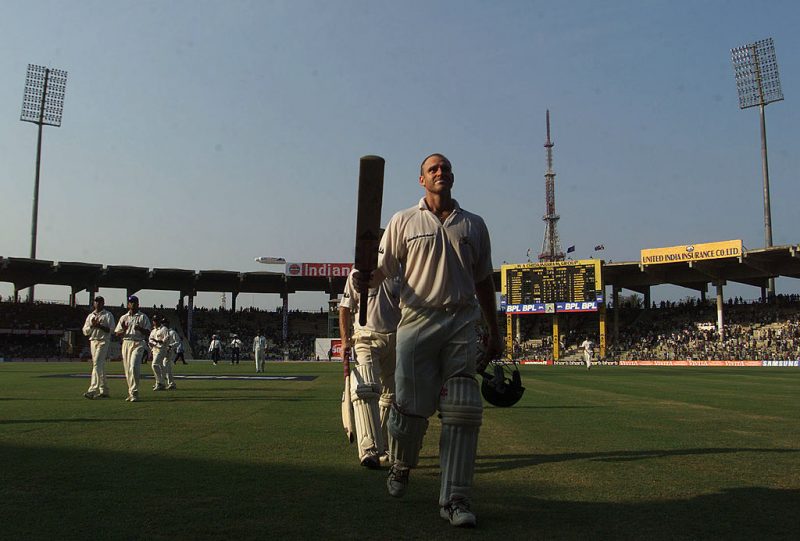 The runs have not abated since. Hayden’s tally of 1391 in 2001 was then third only to Viv Richards and Sunil Gavaskar in a calendar year. Starting with that Indian series, Hayden made 2560 runs in 25 Tests, with 11 centuries, including a run of eight in 13 Tests, prompting Steve Waugh to compare him with the incomparable – Donald Bradman. At the end of the 2001 Ashes tour, he and Justin Langer came together serendipitously to form an opening partnership that was instantly world-beating, yielding four double-century stands in their first seven Tests together and reducing South Africa to a quivering wreck.

They set out deliberately to revolutionise the opening business; rather than simply absorb the early buffeting and dull the shine, they made up their minds to attack the puny bowlers and their piddling ball. They set out to intimidate the bowling team. “We’re about really asserting ourselves. We’re about making sure the opposition feel how close we are, not in a false way, but because that’s the way we play cricket,” Hayden said. “It starts with us.”

Hayden has also emerged as a brilliant fieldsman, either in the gully or suffocatingly close to the batsman when the spinners are on. He had looked unsuited to one-day cricket – a statutory limitation on his time at the crease was anathema to him – and did not establish himself in Australia’s one-day side until Mark Waugh’s axing in March 2002. Yet within ten months, he was rated No.1 in the world in both forms of the game. His temperament was such that he could thrash and dash, but also bat through the innings, as circumstances demanded. The VB Series finals against England in January 2003 illustrated this. In the first at Sydney, Hayden belted 45 not out from 37 balls as he and Adam Gilchrist demolished a 118-run target in just 74 scintillating balls. Two days later at Melbourne, when Gilchrist was out early, Hayden made a measured 69 from 91 to found what ultimately proved a winning score.

Hayden had one other salutary experience on his way to the top. While he was fishing before dawn one morning off his beloved Stradbroke Island with an Australian team-mate, Andrew Symonds, and another friend, his boat hit a sandbar and sank. They had to swim for an hour to safety through waters where, the previous day, they had seen a school of sharks run amok among pilchards. Hayden said he had been scared. “But I controlled it. It was a good life lesson. There were three of us, and we had to support each other through it.” Shaun Pollock and the new ball would never be so threatening again.

"We’re a competitive nation. We love to beat people. At some stage, we all go over the line"

Otherwise, Hayden said the last two years had passed in something of a haze. “People look at the overall picture; that’s how we all are,” he said. “When I look at the footy, I look at the results and who scored the tries. When you’re involved, it’s different. To me, it’s not really about results. I know they will come. The important thing for me is hitting the cricket ball.” He said he cherished individual awards only on behalf of all who had remained true to him over the years. The spoils he enjoyed were the freedom to surf and fish at his leisure. Fishing and surfing are occupations that demand infinite patience, which enthusiasts want to do for days at a time: much like batting.

Hayden’s life is like his mind – uncluttered. He and his wife Kellie have an infant daughter, Gracie, upon whom he dotes, and they are hoping for more children. He is a devout Catholic who tries to go to church every Sunday wherever he is in the world and says his faith is the cornerstone of his life. In a fiercely secular country and team, this staunchness is unusual. “It’s everything to me, without being over the top about it,” he said.

He easily reconciles his Christianity with a reputation for remorseless sledging. “I am who I am. I’m someone who plays the game with great passion,” he said. “That’s how you become the best player in the world. That’s how you become the best team in the world. We’re a competitive nation. We love to beat people. At some stage, we all go over the line. Hopefully, it’s a lot less often than we could.”

Related Story: Why Matthew Hoggard is one of England’s greats

It was the same competitive strain that led to him breaking a dressing-room window when he was given out on the fourth day of the last Ashes Test, for not even in a dead rubber was failure against England acceptable. It cost him a portion of his match fee, but he did not complain. The window of opportunity had proved much harder to budge than this mere pane of glass, and he had paid plenty in sweat and blood over the years trying to crash through it. He never doubted that it would be worth every drop.