Michael Clarke emerged as a batsman of highest class in the 2009 Ashes and was the only Australian among four Englishmen when Wisden named its Five Cricketers of the Year in 2010. Malcolm Conn paid this tribute to the Australia star.

There was a time when Michael Clarke was viewed even by some of his teammates as a bit of a glory boy. Richly talented and with an impeccable pedigree, this kid was along for the ride – the only twentysomething in a team of hard-nosed thirtysomethings who ruled the world, a Generation Y in a group of uncompromising streetfighters.

Even when he was made vice-captain after Adam Gilchrist retired early in 2008, Gilchrist was one of those warning that Clarke should not assume he would be Australia’s next captain. Was he tough enough when it counted? He has been answering in the affirmative almost ever since. 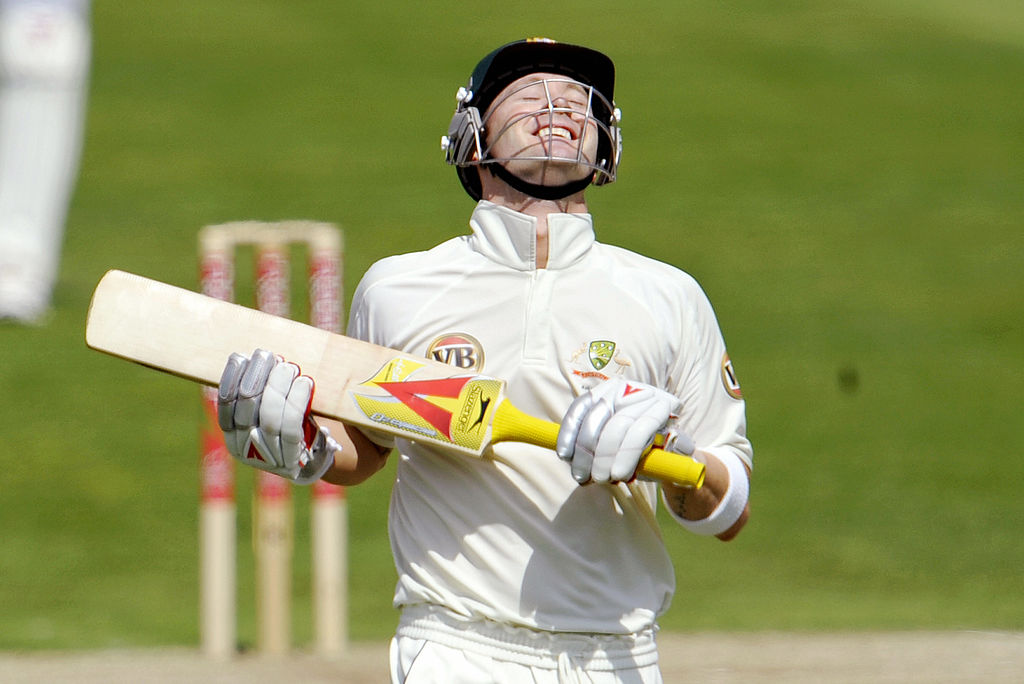 Michael Clarke was brilliant in the 2009 Ashes series

In 2009, Clarke reinforced his status as one of Australia’s premier batsmen, but was gutted when a string of sterling performances came to nothing. It was no consolation that he was Australia’s leading run-scorer in the Ashes, with 448 runs at 64; he failed twice at The Oval, where England won easily to claim the series 2-1.

Clarke had dominated the first four Tests with two centuries, a 93 and an 83, and was in line for the Compton-Miller medal for the series’ best player. That was until the man who rightly beat him for the honour, England captain Andrew Strauss, completely out-batted him and out-thought him at The Oval, with a catch at short cover in the first innings and a spectacular run-out in the second. “The game always finds a way of biting you on the backside,” Clarke observed later.

Michael John Clarke was born on April 2, 1981, in Liverpool, a nondescript suburb amid the vast urban sprawl of Sydney’s working-class west. The second child and only son of Les and Debbie Clarke, Michael is not sure when he first played cricket. “Like any six-year-old you want to be like your father,” says Clarke. “Cricket and rugby league were his two sports, so they were my two sports.” 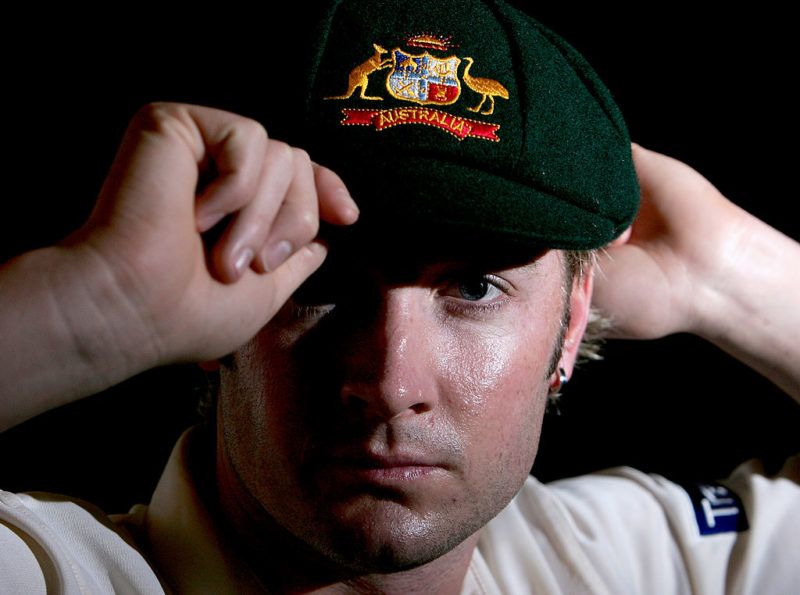 Michael Clarke poses with his new baggy green in Chennai, 2004

He has memories of playing in the morning and watching his father play in the afternoon, sitting around in whites hoping to be called on as twelfth man. Les once owned a brick truck and was a milkman, but the career change which set his son on the path to sporting glory came when the family bought an indoor cricket centre. It became a second home for seven-year-old Michael.

For his senior Grade debut, as a tiny 16-year-old, he was picked as a left-arm spinner and No. 8 batsman. At 18, he captained Australia Under-19 and signed his first New South Wales contract. Turning up to training, he couldn’t quite believe he was sharing the same space as Steve and Mark Waugh, Glenn McGrath, and his idol Michael Slater.

Clarke’s NSW upbringing is widely assumed to be the reason for his light feet and desire to advance against spinners. The Sydney Cricket Ground has been Australia’s Mecca for spin in recent decades, with Stuart MacGill, Nathan Hauritz and Beau Casson all changing states to exploit its turning surface.

However, Clarke claims his nimble movement came much earlier, from the decade he spent in his father’s cricket centre. “Indoor cricket had something to do with it, because every time you hit the ball you had to run to the halfway line,” he says. “If you can take a couple of steps down the wicket you’re halfway there. Certainly, that’s had more of an impact than the SCG, because I played like that as a kid. 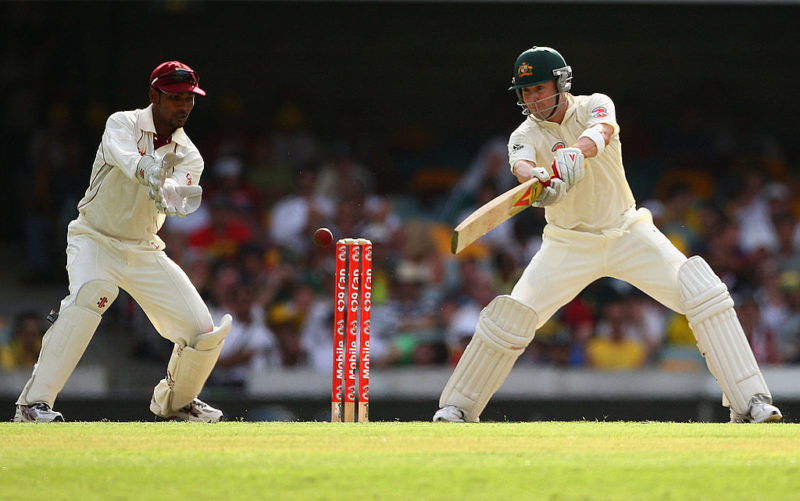 Michael Clarke cuts as Denesh Ramdin watches on at The Gabba, 2009

“The strength of my batting against spin is the cut shot, so trying to get down the wicket allows me to push back off my front leg to play the cut, which scores me a lot of runs. I reckon I score more runs against spin off the back foot than the front foot, but because I try and go down the wicket it can force the bowler to drop a little shorter.”

Clarke never had trouble making sacrifices for his cricket. While his mates were out partying on a Friday night he would often be practising at the centre, believing his party was a cricket match the following day. But it was all a bit of a lark. He was picked on potential for Australia’s one-day side in January 2003, and toured India in 2004-05, aged 23, believing he would be the reserve batsman to Brad Hodge. Instead, Clarke was stunned to learn he would be making his debut in the First Test at Bangalore. 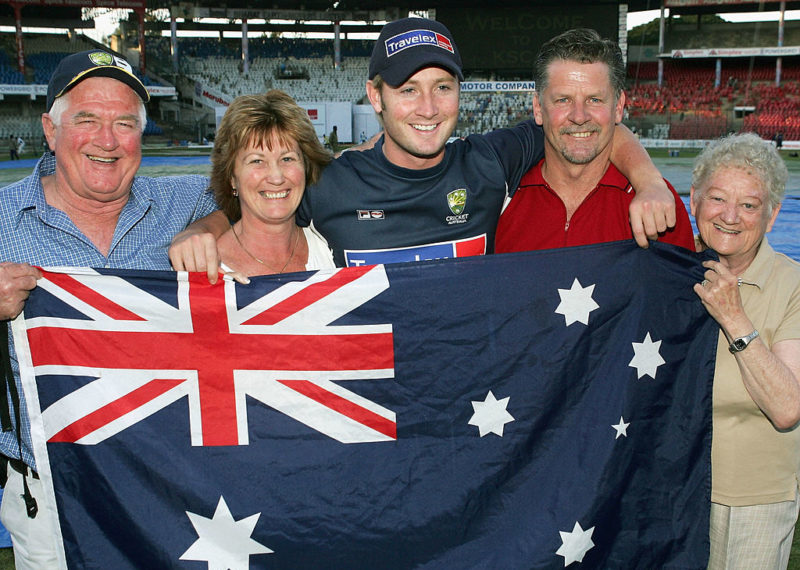 “I was in next, I was listening to my iPod and thinking ‘if I get a duck here I don’t really care.’ I’d just received my baggy green off Warnie and I was that excited, I was loving every minute of it.” He didn’t make a duck. Over the next two days, Clarke made a seemingly effortless 151, and he finished the series with an average of 57. Little more than a month later his first home Test, against New Zealand in Brisbane, produced 141. How much fun was this?

Everyone wanted a piece of him. There was enormous media attention, while sponsorships and endorsements came thick and fast. Mates were always ringing for tickets. He loved his self-image: Michael Clarke the entertainer. “I wanted everyone to like me, to love the way I played – just the way I loved watching the way Slats [Slater] batted.” A year later, he had failed to make another hundred and was dropped from the Test side. 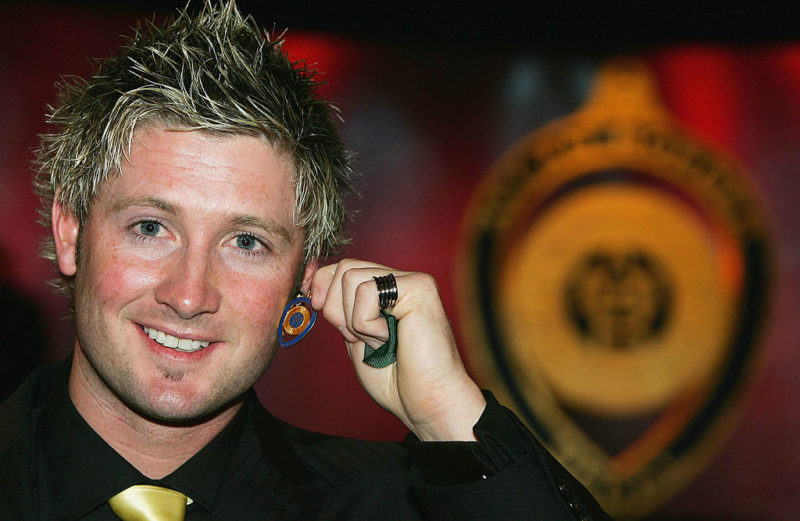 Michael Clarke was awarded the Allan Border Medal in 2005

It became the defining moment of his cricket career. “I was shattered. I flew home and cried with my dad for hours on the couch,” recalled Clarke. “He said very clearly, ‘Mate, you can stay here, you can be upset, there’s a shoulder here to cry on for as long as you want, or you can go the other way, get back into the nets, train your backside off and get back into the team.’ That week after I got dropped had an impact on where I sit as a person as well as a cricketer. There are major things that happen in your life which change your thinking, and that’s the biggest challenge I’ve faced in cricket.

“I know my game better. My shot selection has improved out of sight, my disciplines off the field have improved enormously. Cricket always comes first now in regard to endorsements or sponsors. My preparation is always my No. 1 focus. Before I was dropped, I didn’t know how to prepare.”

Pre-axing, Clarke averaged 37 in 20 Tests, including those two hundreds. From his return in 2006 to the end of January 2010, he averaged 57 with 11 centuries, raising the question of when, not if, he will succeed Ricky Ponting. And the first part of the answer came in October 2009 when, aged 28, he was appointed Australia’s Twenty20 captain.

Michael Clarke went on to feature in 115 Test matches for Australia, captaining the side in 47 of them. His finest year was 2012, which yielded 1,595 runs at 106.33 and confirmed his status as one of the world’s premier batsmen.

This article was first published in the 2010 Wisden Cricketers’ Almanack. See more from the Almanack archive.

Previously from the Almanack: David Gower: Poetry in motion

The 2019 Wisden Cricketers’ Almanack is available to buy