With Herbert Sutcliffe, Percy Holmes formed one of the great opening partnerships of all time. After the resumption of first-class cricket following the end of the First World War, both men were Wisden Cricketers of the Year in 1920.

Percy Holmes was born at Oakes, a suburb of Huddersfield, on November 25, 1887 and, curiously enough, is to a day seven years older than Sutcliffe, with whom he was so closely associated in Yorkshire cricket last season, the two batsmen as a first-wicket pair proving themselves true successors to Tunnicliffe and the late JT Brown.

Holmes played in a local cricket team three years before leaving school, and at the age of 15 he was a fully-fledged member of the Paddock Club, an organisation of no small importance in the Huddersfield League. His first professional engagement was with Spen Victoria, another club of long standing in Yorkshire, and it was through his batting for that team that he came under the notice of the Yorkshire authorities.

Trials with the second XI followed and a period of coaching at Headingley under Stephen Doughty, of the Skipton Club – an experienced player, who had been appointed county coach before the war. In 1913 Holmes was included in the Yorkshire eleven on several occasions, and though he only obtained 170 runs his possibilities were revealed in a second XI match in which he scored 162 not out. He made some progress for Yorkshire in 1914, but though he scored 61 against Gloucestershire at Bristol and 46 against Sussex at Brighton, he was still no more than a batsman of promise. 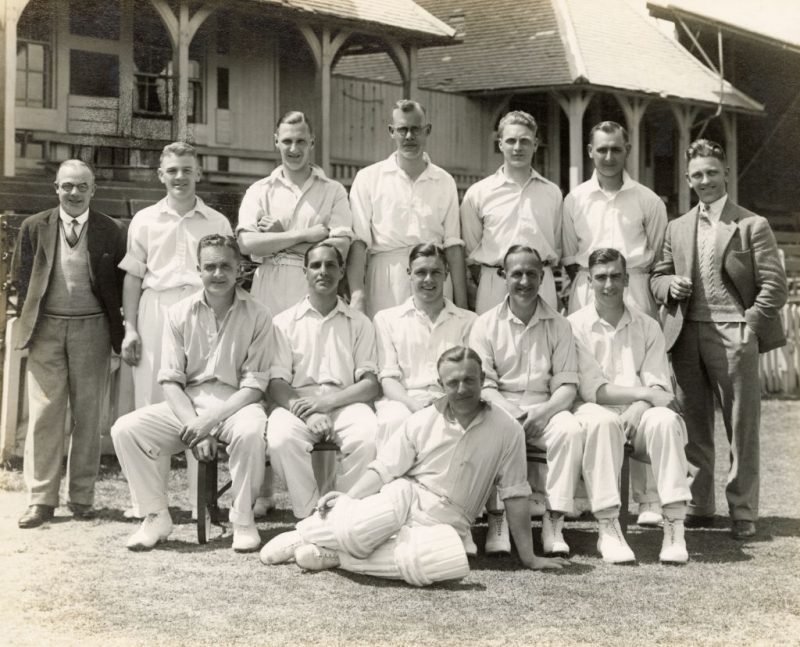 Herbert Sutcliffe and Percy Holmes, seated either side of Brian Sellers in the middle in Yorkshire’s team photo in 1932

The war of course lost him four invaluable years, but he was able to play some cricket for the Great Horton Club in the Bradford League. When first-class cricket was resumed last May he jumped to the front at once, surprising even those who thought most highly of his batting.

He played a beautiful innings of 99 against the MCC at Lord’s in his second match, and from that moment he never looked back. It was in the second innings of the match with Notts at Sheffield at the end of June that Sutcliffe was promoted to be Holmes’s first-wicket partner. For the great results that followed no one could have been in the least prepared.

Five times they put up the hundred together, their most productive partnership being 279 against Northamptonshire. Far more memorable, however, was the 253 against Lancashire at Sheffield, a performance never equalled in the long series of matches between the two northern counties.

Percy Holmes died #OnThisDay in 1971. With Herbert Sutcliffe, he was one half of one of the most prolific opening partnerships of all time.

The two batsmen met with almost equal success, each hitting up five hundreds. It was their consistent play in match after match that more than anything else so impressed good judges. Of course, as so much the younger man, Sutcliffe may have the brighter future before him. Holmes strikes one as being in all respects a first-class batsman.

He has the sovereign virtue of playing with a perfectly straight bat, his defence is strong, and he has great patience and self-restraint. As regards hitting, he is best on the leg-side, but as he showed in the latter half of the season he is by no means deficient either in driving power or cutting. In the field he has made himself quite an expert at slip. All being well he ought to be seen in the players’ XI in the coming season.

In a career that stretched until 1933, Percy Holmes scored 30,573 runs at 42.11 with 67 centuries. But he never enjoyed the international stardom of Herbert Sutcliffe, making just seven Test appearances.