Phil DeFreitas took a long time to establish himself as an England player, but a glorious summer in 1991 earned him a Wisden Cricketer of the Year award.

England began their 1991 campaign against the West Indians in complete disarray. They had been badly beaten in the winter’s Test series in Australia, a performance which produced from their captain, Graham Gooch, an uncharacteristic outburst in which he was highly critical of the character of several players. Now England faced the undisputed world champions of Test cricket, who had just beaten Australia in a highly charged, ill-tempered series. Viv Richards, who had never lost a Test series as West Indies’ captain, was determined to win in what he declared would be his last one. And to make matters worse, Angus Fraser, England’s most consistent seam bowler, had been ruled out for the summer because of injury.

No one could have forecast the dramatic about-turn in England’s attitude and performance, which led to the series being squared, two matches apiece. And while Gooch must take much of the credit through his direct, uncompromising leadership and inspirational batting, the startling rise in stature of Phillip DeFreitas as England’s principal bowler was also a major factor. 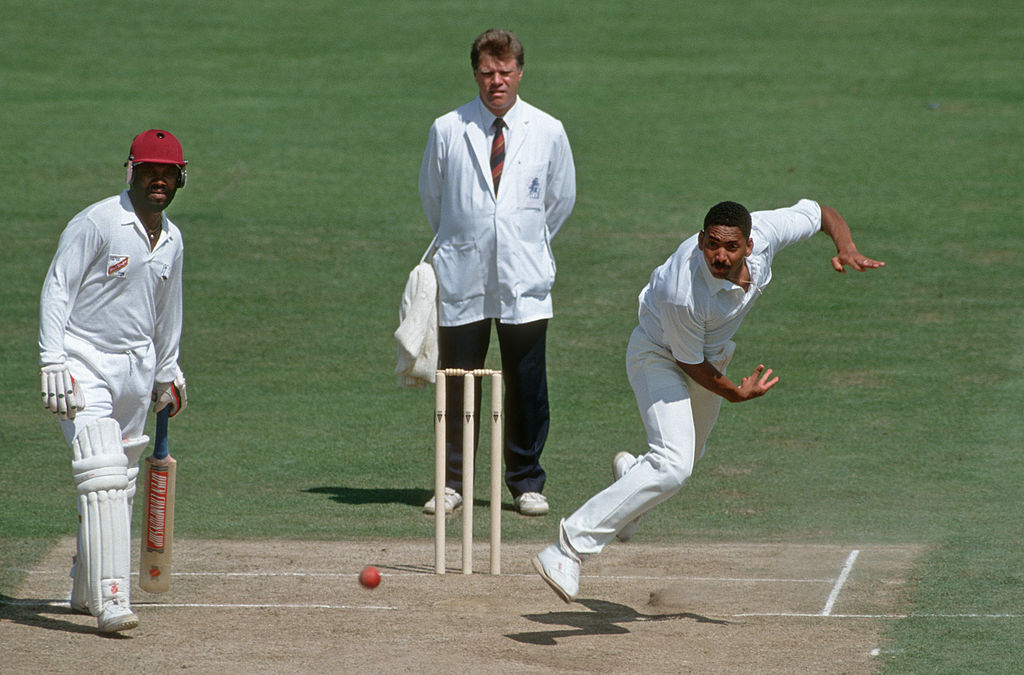 Overlooked as an original selection for the winter’s tour of Australia, and put down instead for the A team’s visit to Pakistan, DeFreitas was in determined mood when he boarded the plane for Australia shortly before Christmas to cover for the injured Gladstone Small. He impressed at Adelaide and Perth, taking 4-56 in 26.2 overs in Australia’s first innings at Adelaide, and he returned home more certain than some of his team-mates of selection for the summer’s series.

In the six Tests in 1991, DeFreitas took 30 wickets at an average of just 19.06, including career-best figures of 7-70 against the Sri Lankans at Lord’s in their solitary Test match. His contribution to England’s morale-boosting victory over the West Indians in the opening Test, at Headingley, was match figures of 8-93; and having reduced West Indies to 24-3 in the second innings of the fourth Test, at Edgbaston, he came within a millimetre of immediately dismissing Richards, who went on to steer his team home and ensure that they could not lose the rubber.

DeFreitas finished the series with 22 wickets at 20.77, his wickets only decimal points more expensive than those of Ambrose, and throughout it he had fielded breathtakingly. At Trent Bridge, in the third Test, he registered his maiden Test half-century during a frantic, crowd-pleasing partnership of 58 with David Lawrence, which resulted in the game going into the fifth day.

With the benefit of hindsight, it is fair to say that some of his colleagues, myself included, expected too much of a 21-year-old who was still trying to come to terms with instant success

Phillip Anthony Jason DeFreitas, more commonly referred to on the county circuit as Daffy, was born at Scotts Head, Dominica, on February 18, 1966. His parents brought him to London 10 years later, where he attended Willesden High School, along with his England and former Leicestershire colleague, Chris Lewis. A spell on the Lord’s groundstaff confirmed that DeFreitas was a cricketer with rare potential, and Don Wilson, the MCC coach, recommended him to the then Leicestershire coach, Ken Higgs.

I remember his trial match well. Smarting at having been forced to play for Leicestershire’s Second Eleven against MCC Young Professionals, having had a long stint on first-team duty, I had my spirits lifted immediately by the sight of Gordon Parsons being lofted into the ladies’ toilets on the Milligan Road car park. The same willowy youth then drilled me for six over extra cover, and when he later bowled with genuine fire, he returned to London that evening with the ink still drying on a contract for the 1985 season. He made eight Championship appearances that year, his 21 wickets at 29.47 including an innings return of 5-39 against Lancashire on his début.

Given a regular place in 1986, he responded by taking 94 first-class wickets and scoring useful runs attractively in the lower order. His flamboyant maiden first-class century against Kent, made in 106 minutes with 17 fours, came against an attack comprising Alderman, Dilley, Underwood and Ellison after Leicestershire were 43-7. Then, taking a leaf out of Alderman’s book with regard to line and length, he took 6-21 in 10.4 overs as Kent were dismissed for 87. His prize was a place in that winter’s touring party to Australia, where he played in four Tests as Mike Gatting’s side retained the Ashes, and he was virtually ever-present as England swept the board in the two limited-overs tournaments. 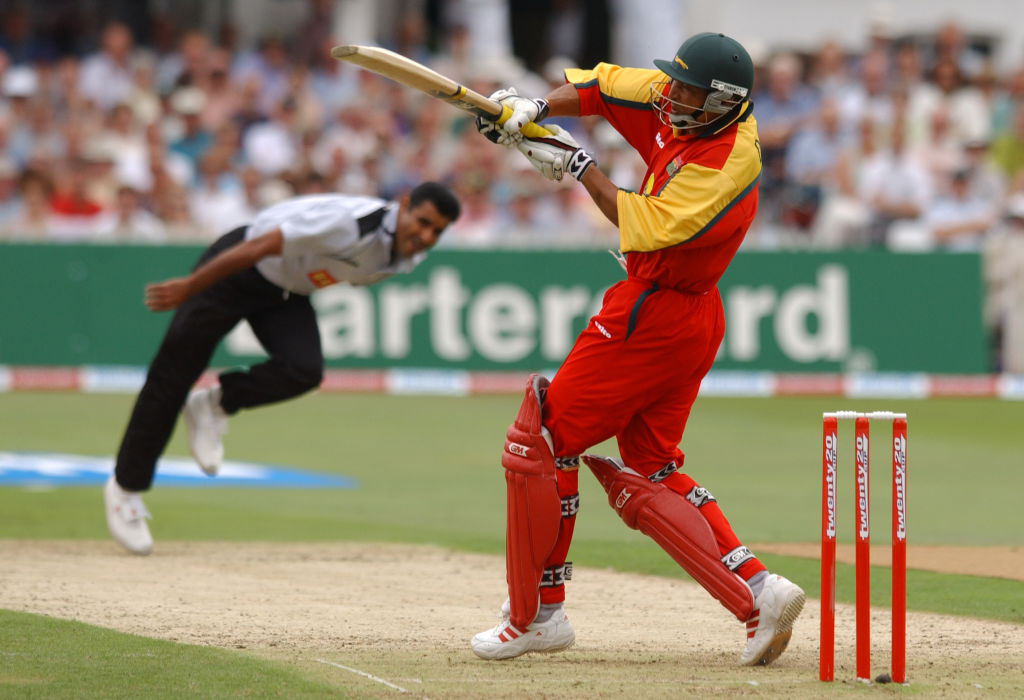 It was on his return from Australia that relations with Leicestershire began to sour. With the benefit of hindsight, it is fair to say that some of his colleagues, myself included, expected too much of a 21-year-old who was still trying to come to terms with instant success, and with the dramatic transformation of his lifestyle which resulted from it.

He appeared moody at times, and although he never failed to perform on the big occasion, DeFreitas did seem rather less enchanted with the more mundane atmosphere of the County Championship. Peter Willey returned the leadership of Leicestershire to David Gower for the 1988 season, but the impasse continued, and after a couple of well-documented confrontations, DeFreitas and Leicestershire parted company before the summer was through.

“I felt I was being knocked when I didn’t perform,” he has subsequently said. “Perhaps it was no bad thing at that age, but I felt I had to go, and the move to Lancashire was the best thing I could have done.”

From my first encounter with him at Grace Road in 1984, DeFreitas has never looked anything but an international cricketer to me. Yet, until last summer he had struggled to hold his place in the England team. I believe this was because the England hierarchy had failed to identify precisely what his role should be. Bristling with natural aggression on the field, and capable of bowling genuinely fast at times, he was looked on purely as a strike bowler in his early years, but he lacked the required control. A strike-rate of a wicket every 88 balls, at a cost of 42.31 each, bore little testimony to his undoubted ability. The fact that his greatest success came in limited-overs cricket, for which he was usually an automatic choice, served only to prove that he was at his most effective when bowling within himself.

In 1991, with accuracy paramount against the West Indians, DeFreitas took the opportunity to bowl regularly at that reduced pace. He moved the ball both ways off the seam, he recaptured his ability to make the ball bounce from that whippy action of his, and he reaped the reward. He is now 26 years old, and appears contended and confident. It is my belief that his most productive cricket is still to come.