VVS Laxman was the key architect of India’s historic win over Australia in Kolkata in 2001, striking an iconic 281 to help the hosts break Australia’s incredible winning run. Dicky Rutnagur paid tribute to him when he was named a Wisden Cricketer of the Year in 2002.

For two reasons at least, the second Test of the 2000/01 series between India and Australia, at Eden Gardens, will stand out among the most prominent landmarks in the game’s history. India’s win brought to an end Australia’s awesome run of 16 wins, the longest ever, and no side following on as far behind as 274 runs had previously come back to win a Test match.

Victory against such heavy odds was too large a feat to be accomplished by just one man. Indeed, three architects went into shaping it: off-spinner Harbhajan Singh, whose 13 wickets included a first-innings hat-trick, VVS Laxman and Rahul Dravid. To weigh importance of the roles played by each of them might seem unfair, but in truth India owed the largest debt to Laxman. First, he kept the jaws of defeat wrenched apart until they ached and became too weak to snap; and secondly, he scored his epic 281 in the second innings at a rate that left enough time for Harbhajan and his fellow-bowlers to finish the job. 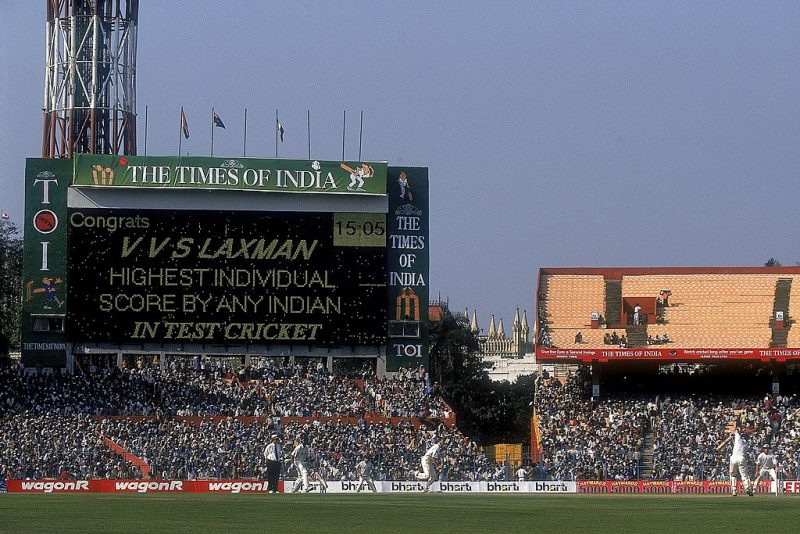 Laxman’s Eden Gardens knock was a record-breaking one

The first Test at Mumbai had been won by Australia in three days. And when India were 317 behind with only two wickets standing at the end of the second day in Kolkata, the prospects of another premature finish were writ large. Laxman was 26 not out that evening. He was unbeaten also – albeit now in the second innings – on the following evening, and again on the one after, this time with 275, the highest Test score by an Indian. By then, it was India whose nostrils were filled with the scent of victory. Haste required by the impending declaration deprived Laxman of further personal glory, but his partnership of 376 with Dravid was India’s largest for any wicket against Australia, and their second-highest ever.

Vangipurappu Venkata Sai Laxman was born on November 1, 1974 in Hyderabad, to parents who are both doctors – his father a general practitioner and his mother a radiologist. It was taken for granted that Laxman, like almost all members of his near family, would take up a profession that required academic excellence, and he was therefore sent to an appropriate school, Little Flower. His father was Laxman’s role model and he always assumed he would become a doctor as well. But medicine receded into stand-by mode once he fell under cricket’s spell.

"My parents must have had many misgivings about my decision, but they gave me their fullest support"

Yet with sport not figuring in Little Flower’s curriculum, Laxman’s talent could easily have remained latent. It was spotted by a cricket-playing uncle during family games in his grandparents’ back yard. Having learnt the basics from this uncle, he then went to St John’s Coaching Foundation for more advanced tutoring, and from there graduated to playing age-group cricket for Hyderabad, beginning with the Under-13s.

As Laxman approached his 18th birthday, his head and his heart were both telling him that his future lay in cricket. The defining moment arrived when he had to choose between exams for entrance to medical school, or a place at an Under-19 national coaching camp. Looking back to that fateful day, he said: “I decided to give myself four years to make it in cricket, knowing that if I didn’t, I could always go for medicine. My parents must have had many misgivings about my decision, but they gave me their fullest support.”

He did not have to wait long to reassure his parents that he had chosen wisely. Already a full state player, he was picked for India in an Under-19 Test series against Australia, who had Jason Gillespie, Brett Lee, Matthew Nicholson and Andrew Symonds in their ranks. He made four big scores against them, with 151 not out his best, giving early evidence of his taste for Australian bowling (his average against Australia is currently 56.00). A call to full colours was only a matter of time, and while he waited he had an extremely successful Under-19 tour of England. He began the “Test” series with a century on a blissful Taunton pitch. 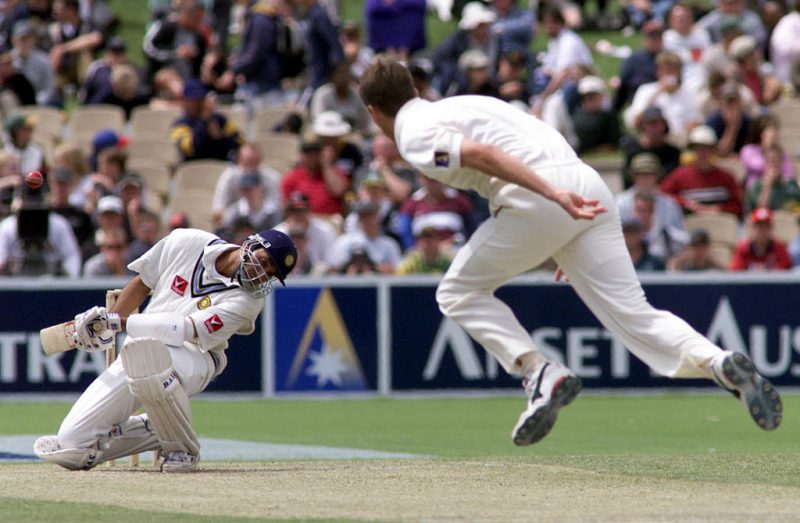 Laxman gets under a Glenn McGrath bumper

As Laxman grew to full strength, tall and elegant, and big scores became more frequent, his batting acquired a captivating splendour. His driving possessed a Dexterian majesty and his flicked drive through mid-wicket stirred the senses. He was capped in 1996/97, a winter in which India played home-and-away series against South Africa, followed by five Tests in the West Indies. Laxman played eight Tests during this span and passed 50 three times. Indeed, he was given a fair run, but without being allowed a secure place in the batting order; in the Caribbean, he found himself opening, a role for which he had no taste.

His Test career went into a trough and might well have ended on the Australian tour of 1999/2000, when India were whitewashed 0-3. But in his final innings there, at Sydney, he hit a sumptuous 167 out of a total of 261, from only 198 balls. It was, one thought at the time, the sort of innings a batsman plays once in a lifetime. And so it seemed it would be when he was dropped after India’s Mumbai defeat by South Africa not quite two months later. His volume of runs in that season’s Ranji Trophy, a record 1,415 with a record eight hundreds, might almost have been mocking him. In Hyderabad’s semi-final against Karnataka, he made 353, his fourth score at the time over 200.

Laxman achieved little in his one Test when Zimbabwe visited, or for that matter in the first Test against the Australians. That Sydney century seemed a long time ago. But promoted to his favourite No.3 position for the second innings at Eden Gardens, he bettered it handsomely, sustaining his brilliance for ten and a half hours, during which he faced 452 balls. Half-centuries in both innings of the final Test helped India take the series 2-1; they also took his aggregate for the three matches to 503 at an average of 83.83. Medicine would just have to wait a while longer for VVS Laxman.

Laxman played his 134th and final Test in January 2012, finishing his international career with 17 Test centuries.