On February 21 the latest edition of the Women’s T20 World Cup will begin in Australia, with 10 teams eyeing up a spot in the final on March 8 at the Melbourne Cricket Ground.

The organisers are targeting a full house on International Women’s Day; it’s a reflection of how far the women’s game has come since the inaugural tournament, held 11 years ago in England and won by the hosts. The ECB’s introduction of full-time contracts came five years later, followed by the start of the Women’s Big Bash League in 2015 and then a seminal World Cup in 2017.

To revisit 2009 is to go back to a radically different time, but one that was special for an all-conquering England side. They arrived at the tournament in June having won the 50-over World Cup in Australia just three months earlier. With an Ashes series to follow later in the summer, the aim was clear: world domination. Three members of that side – captain Charlotte Edwards, batter Claire Taylor and left-arm spinner Holly Colvin – spoke to wisden.com about how the 10-day tournament unfolded.

After returning from Australia with one World Cup trophy in tow, confidence was high, but with full-time professional contracts yet to emerge, preparations weren’t what you might have thought them to be…

Holly Colvin: I remember coming back from Australia where we’d just won the World Cup, and the first thing I did was get a cleaning job at my local sports club.

Charlotte Edwards: I remember we used to get together once a week before the tournament. It was very different to what it looks like now.

Taylor: In between the two tournaments, we talked a lot about this mantra we had for 2009, which was world domination.

Colvin: That was the plan. We had a massive summer: to win the World T20, the Ashes and bag all three for the ultimate trifecta. 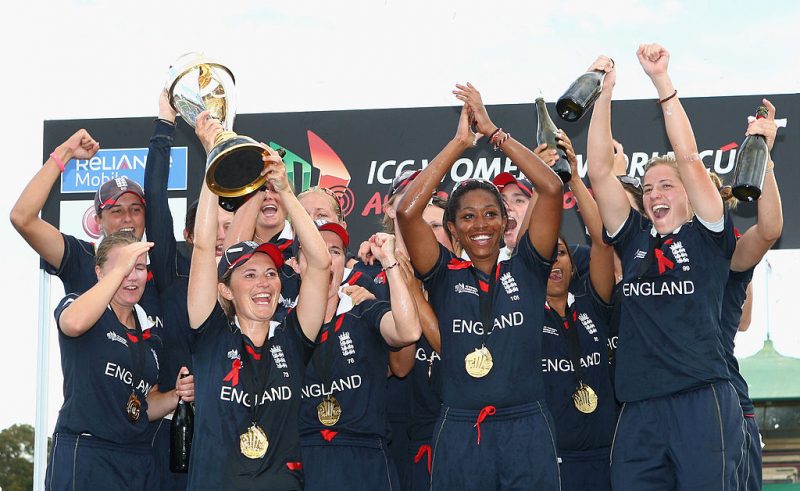 Running alongside the men’s competition, the women’s tournament began with eight teams split into two groups. While the semi-finals and final were held at bigger venues as part of double-headers with the men, all of the group games were held at Taunton.

Colvin: I felt like we were a bit of a sideshow down in Taunton. We only really got press coverage when we reached the semi-finals and final. Then the coverage did explode, and that was brilliant.

Taylor: Having the games at Taunton meant the pitches were good for women’s cricket. Getting good numbers in gave off a great atmosphere, whereas numbers at the bigger grounds didn’t really give that. The format of the tournament was probably right in bringing through the best teams to the bigger venues, when the games were tied up with the men’s competition. But that was then and this is now. I think it worked well, but hopefully now there would be a lot more people interested in covering those group games. If we hosted that competition again I’d hope we’d get around the country a bit more and bring women’s cricket to different places.

Edwards: It actually suited us really well. We’d played a lot of games at Taunton and we had a lot of home support. I remember the men not playing very well and losing to Holland, so once they were out, the focus was very much on us.

England cruised through the group stage, sealing wins over India, Sri Lanka and Pakistan. Colvin led the way with ball, taking eight wickets across the three matches. Edwards was Player of the Match against both India and Pakistan, while Taylor’s 54-ball 75 meant she took the honours against Sri Lanka. If there was one worry for England it came with an injury to their fastest bowler.

Taylor: We got through the India match really well, winning by 10 wickets, and that was the important match in our group. The key moment was actually an out-of-game situation. In a warm-up prior to the Sri Lanka game, Katherine Brunt got hit in the face by a ball during fielding practice. She had a really good shiner for the second half of the competition.

Edwards: We thought we might have lost her to a fractured cheekbone but it was just heavy bruising.

Colvin: She came out with a massive bruise, a black eye and just looked a bit more scary. It was hilarious. 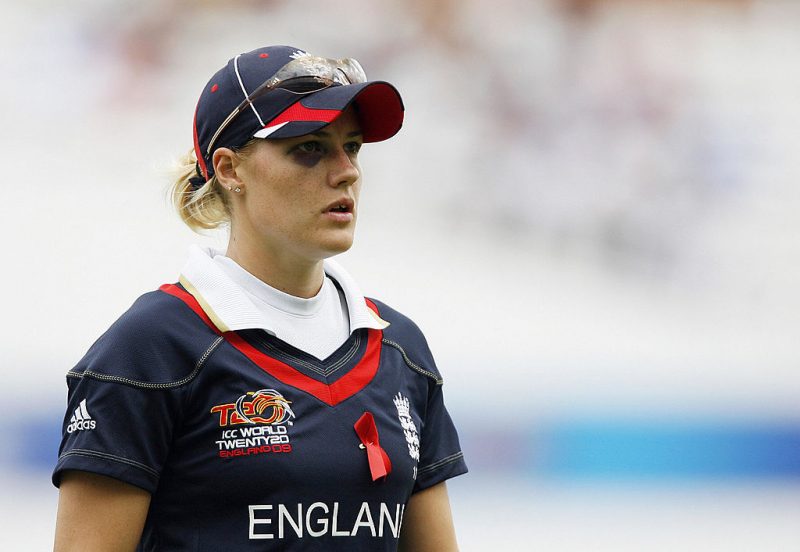 Cue a showdown with Australia at The Oval. And it wasn’t an ideal first half, with the Aussies putting on 163-5, the second-highest score of the tournament after their own 164-6 against South Africa in the group stage.

Taylor: We dropped catches and we weren’t great in the field. Having played at Taunton, the boundaries were set for the women’s game and you get used to the angles you have to set in the field. I don’t think we responded particularly well to that. Australia were another gear, another level better than teams we’d played in the pool matches – 164 was certainly something we hadn’t chased before against a team of that standard. We hadn’t made that many runs batting first against a team of that standard either, so it was a big ask.

Colvin: I felt a bit sick. I seem to remember bowling awfully because I was nervous. I remember Jenny Gunn got hit for a massive six off Karen Rolton and I was just like, ‘Oh my God, this is going to be a big ask’. I hadn’t felt that nauseous for a long time.

What followed was quite incredible. From 43-2 after seven overs, Taylor and Beth Morgan took England home with three balls to spare, putting on an unbeaten stand of 122 off 75 balls. Taylor top-scored with 76 not out from just 53 balls.

Edwards: I remember getting the girls together and saying: ‘They’ve got them, now we’ve got to get them’. I actually felt really confident. I didn’t go in deflated. I went out really hard and got 20-odd which kept us close to the rate.

Colvin: Lottie [Edwards] opened up and just went: ‘We’ve got absolutely nothing to lose here, so we might as well go out all guns blazing’. That set the tone for us to absolutely smash it. When Tails [Taylor] and Beth went in they just kept going, kept up with the rate that was needed and didn’t stop till they got there. 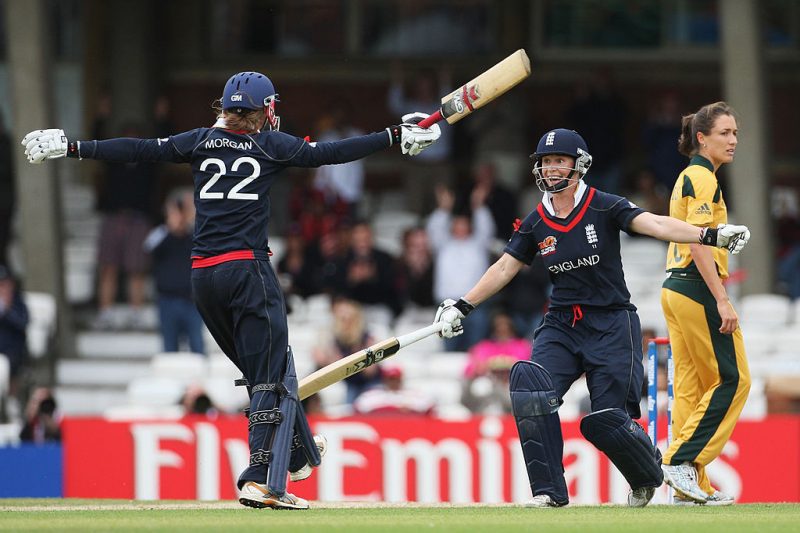 Claire Taylor and Beth Morgan take in the winning moment

Taylor: I was really determined because we couldn’t achieve world domination unless we got past the Australians. Again it was them getting in our way. We hadn’t beaten them in the 50-over World Cup either; they beat us in our dead rubber in the last Super Six match. There was just such a determination going into that second innings. I think we had a couple of advantages over the Aussies. Similarly to us, they didn’t get their angles right in the field. The boundary was massive at The Oval because it was left out for the men’s match directly after ours.

There were so many twos around and we were well set. It wasn’t the perfect innings. I’ve watched back the highlights and I can see that I’m getting tired and making poor decisions, but the Aussies don’t capitalise on them. In terms of executing a run chase, I’m the kind of batter that thinks runs scored in run chases are worth twice as much as those scored batting first. I practised and practised run chases for a long time. Over an hour and a half of a batting session, I would spend 10-15 minutes at the beginning doing technical stuff, but the majority would be tactical work. It’s up there as my best innings because, Beth and I, we took responsibility.

Edwards: Claire at that point in time was the best player in the world. As long as we had her out there, we always felt we were in with a chance. But to do it as easy as we did in the end, it really just felt like it was meant to be. And it was a really pivotal game for women’s cricket. It made a few people, certainly on the male side of the game, sit up and watch the women’s side. They’d witnessed a special game of cricket.

A showcase final at Lord’s against New Zealand was dominated by England, who triumphed by six wickets. Brunt, sporting a black eye, took 3-6 from her four overs, and Taylor was on hand to hit the winning runs in a chase of 86.

Colvin: I guess it was a bit of an anti-climax to the tournament. Australia was the most ridiculous game of cricket I’d been involved in. We got Suzie Bates out early and when Katherine took a couple of quick wickets, we kind of knew the game was there. 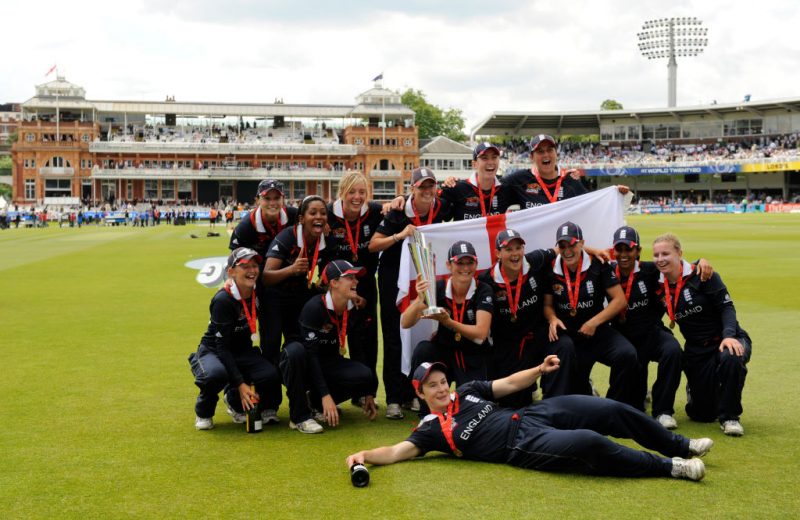 Taylor: I’d got out in the chase in the one-day World Cup final and I’d watched Holly hit the winning runs, which was such a relief, but I was determined that I was going to take responsibility, and I was going to be there when the winning runs were hit. Nicola Browne bowled one in the slot and I knocked it over the top. The first feeling was relief; we’d achieved the goals we’d set. We lost just one game that summer and went on to retain the Ashes. World domination: tick.

Edwards: Running on the pitch at Lord’s to win a World Cup was pretty special. To have our friends and family as well – that’s what we’d missed in Australia. To share that day with your nearest and dearest – it was a day you’ll never forget. I remember waking up the next morning quite hungover and I walked out of my room and on the floor was The Times with a picture of me on the front page on a Monday morning. We’d never seen that type of coverage before. On every paper, if we weren’t front page, we were back page. That was a moment to savour.