Adam Gilchrist redefined the role of a wicket-keeper batsman in a dazzling career for Australia. After his retirement in 2008, his predecessor, Ian Healy, wrote a fascinating assessment.

Adam Gilchrist is a player who should be remembered as being even better than his statistics suggest – a big statement, but a true one.

Given that he made more dismissals (416) than anyone else in Tests, and had a batting average of 47.60, the stats say a lot about his greatness. But they don’t quite reveal the full story of the comfort and confidence he gave his team-mates. “Leave it to Gilly,” is the phrase that keeps coming into my head. Many times Australia did. Hardly ever did he let them down. Of his 96 Tests, Australia won 73 and lost just 11. It is no coincidence that in the only two series he played that Australia lost – in India in 2000/01, and in England in 2005 – he struggled as a batsman.

He was a remarkable performer because, for all his greatness, he did not create the constant fuss that surrounds champion specialists such as Brian Lara or Sachin Tendulkar or Ricky Ponting, who always seem to be generating headlines and massive expectations as the danger-men of the day. People rarely concentrated on Gilchrist in such a way – but everyone knew he was there, and everyone knew he was dangerous.

As a batsman, he was an extraordinary performer. He scored 14 of his 17 Test tons in the first innings, and all but three were in matches his side won. He was great at setting up a game then handing it over to the top order in the second innings. His first-innings average of 52 was much higher than his second-innings 36, although the second figure is still honourable, for it was propped up by a string of useful scores when every run was a pearl. 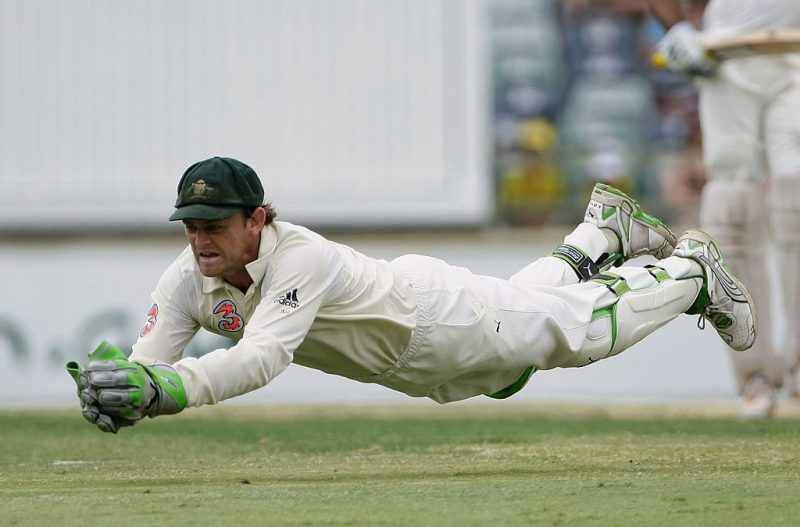 Gilchrist won 76 per cent of the Tests he played in

Gilchrist had an unusual batting technique, brutally crude and brash, and unconventionally brilliant. It first made my jaw drop even before he had played international cricket. The Queensland side I was playing in came up with a plan to bowl yorkers to him, but he was thrashing our best efforts down the ground. He had a big, high, sloppy backlift you would back yourself to get the ball under. But suddenly that ball would disappear.

His ability to hit to all parts made him extremely difficult to bowl to. There was no black hole in his scoring range, and Matthew Hayden once admitted that, while the area behind point was something of a personal blind spot, Gilchrist was “good everywhere… which is what makes him so great”. Many different game plans were used to curb his brilliance. Some had their moments – he was not flawless – but I never saw one which he could not counter on a good day. England nailed him in 2005 with the swinging ball into off stump from around the wicket, but there were many series when similar tactics failed. Like most of that Australian squad, he was thinking too much about everything but the next ball.

England’s tactics were brilliantly executed, but they exploited a form slump rather than a flawed technique. Gilly was vulnerable to that sort of swinging ball in the same way that Tendulkar would occasionally fall to the one which nipped back from a good length towards middle and off. It was not an Achilles heel, more of an occasional tender spot.

For Gilchrist to win such a high percentage (76 per cent) of the Tests he played was simply freakish. The West Indian wicketkeeper Jeff Dujon played through one of the greatest eras of dominance the game has seen, yet even he won only 44 of 81 matches, or 54 per cent.

Gilchrist’s batting record showed that he was best when fresh – or when he could see the light at the end of a gruelling tunnel in the final Test of a series. He averaged 57 in opening Tests, then 49, 43 and 15 in the ones that followed, but 61 in the fifth Test. No surprise there. I used to spend a lot of time pre-series grooving my batting technique, but once the later Tests came around in spin-friendly venues such as Adelaide and Sydney you spent more time worrying about your keeping. 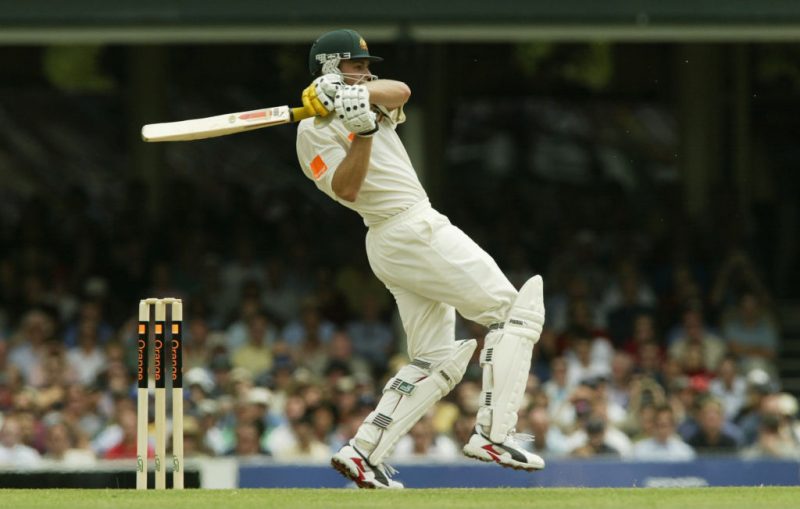 India did best against him, restricting him to an average of just 27 – his next-worst was 42 against Sri Lanka – which says a lot about India’s competitiveness during his time. No other country has been able to contain Gilchrist and Ponting like India. It also says something about the way India’s batsmen started things by batting for long periods to examine his energy reserves as a keeper; then their bowlers executed with the ball far better than any other opponents. On the other hand, he simply slaughtered New Zealand, with four centuries in 11 Tests, many made at breakneck pace, and an overall average of 76.

Gilchrist always considered batting his secondary role behind his keeping. Where he surprised everyone was his work over the stumps. His three years in the one-day squad before he made his Test debut helped with that: he had a nice taste of Shane Warne’s deliveries in the one-dayers before he had to keep to him on fourth- and fifth-day wickets in Tests. In his very first Test, he provided one of his finest stumpings. A full leg-side miss by Pakistan’s Azhar Mahmood allowed Gilchrist to showcase everything he had learned about keeping to Warne. In one beautiful moment, he arrived: the team instantly thought they had a genius, and he could fully relax.

His work standing back was not technically perfect, but balance and application got him through easily. He sometimes got stuck a little high, but would often disguise that with a split-second dive to pouch a one-hander either left or right. I was always of the opinion that he could have moved half a step quicker when standing back, while standing up he could have stayed a little bit lower more often and been a bit more powerful sideways. But these are very high-level criticisms, for the trained eye only.

I don’t believe Gilchrist’s keeping improved or declined during his eight-year reign, but it certainly went in cycles. I spotted some bad habits from my own career occasionally sneak into his keeping – tiredness or laziness or poorly structured training sessions – and had the occasional chat with him when I noticed things that were affecting his game. In 2001, for example, he had a poor Edgbaston Test as a keeper, and I noticed he was practising poorly. In catching drills at training he was having the ball hit too hard at him, which meant he was not giving himself enough time to practise his footwork, and rhythm got lost.

I remain staggered by his durability. He didn’t miss a Test match – he played 96 straight – and barely ever missed a one-dayer through injury either, which will be a source of satisfaction to him. He never had to do major rehabilitations, and was rarely injured, which showed how professional he was with things like diet (his wife Mel is a dietician) and treatment of his knees. When I first saw how much he had to do to keep his kneecaps in order as a youngster, I felt there was no way he could go the long journey and do what he has done. His raw endurance was, to me, as impressive as any part of this great cricketing package. 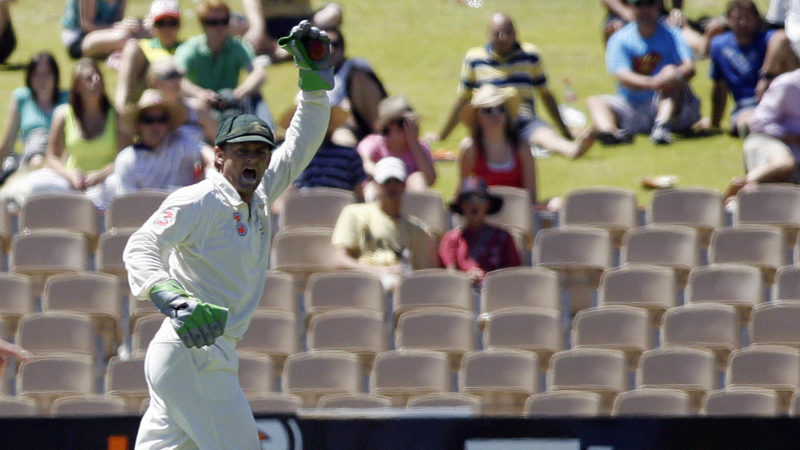 Gilchrist accrued 905 dismissals as a wicket-keeper in international cricket

Gilchrist maintained a long tradition among Australian wicketkeepers of celebrating wins with a decent night’s drinking. A consolatory drink was often as valuable as the celebratory one: he was the champ there too. A “none or a gutful” man, but one who knew how to drink – never in a moment’s trouble after any of Australia’s Test wins, three World Cups, and plenty more.

An Australian batsman who walked was a new breed in the modern era and, ironically, to my knowledge he never had to walk again after his initial World Cup gesture against Sri Lanka at Port Elizabeth in 2003. Gilly was in an extremely strong position to begin walking – he was averaging superbly with the bat, with glovework to match. He took on a tough position, though, as the wicketkeeper who walked. There are always times when keepers appeal without full knowledge of whether something is out, and this was the dilemma he took on – to leave it to the umpire in the field but not while batting.

Another facet of his play which was rarely talked about was gamesmanship. A turn of phrase, delivered succinctly at appropriate moments and disguised with humour, became extremely effective. His blood boiled over at times, and he was spoken to more than once by match referees. While he was Mr Natural, he loved to get shirty and dirty, which further enhanced his image among his peers.

Incredible talent unsurpassed in the game’s history, in a style never before seen; a team man who provided confidence to all around him, allowing them to perform naturally without fear of losing; someone who would scrap with you in tough times. What more could you ask for? The answer is nothing. Adam Gilchrist had the lot, and was able to show us it all.