In a 26-year first-class career, Alan Jones amassed over 36,000 runs. After leading Glamorgan to the final of the Gillette Cup in 1977 he was named a Wisden Cricketer of the Year.

Glamorgan might not have such a rich heritage and tradition as some of the older established English counties, but there are a number of Welshmen who have contributed liberally to the development of the game in the land of their birth. One immediately thinks of Norman Riches, John Clay, Cyril Walters, Maurice Turnbull, Emrys Davies, Dai Davies, Wilf Wooller, Alan Watkins, Don Shepherd, Jeff Jones and Gilbert Parkhouse. In this Gallery of Greats are many who played in Test cricket, while two took Glamorgan to the County Championship.

But no native, especially in the last decade, has had a bigger influence on cricket in Wales or been more successful in terms of personal performance than Alan Jones, the most thoroughbred Welshman of them all. His name is associated with many Glamorgan records and there is no doubt that 1977 will go down in Glamorgan history as the year which gave Alan Jones his finest hour. 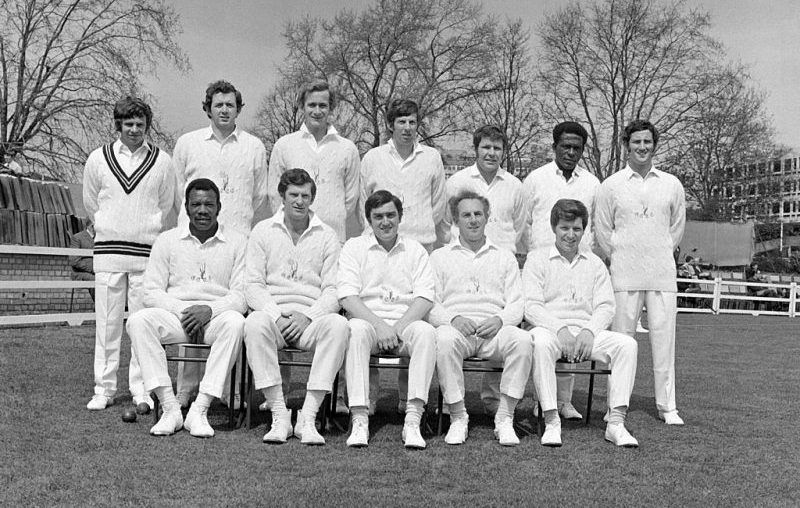 Glamorgan side, circa May 1971. Jones is in the front row, first from right

Consider the background. The previous season had been the most traumatic since Glamorgan’s birth. Internal dissensions with wild allegations of a players’ conspiracy against the captaincy of Majid Khan and a members’ revolt combined to provide a daunting challenge to the next man who accepted the captaincy. So with the help of a streamlined committee under the chairmanship of Ossie Wheatley, a former captain, Alan Jones faced his new task with a firmness and friendliness which brought about a near miracle in the playing fortunes of the team. He lifted them from the depths and restored their pride and faith in themselves. His influence on the young players had an important bearing on the field, particularly in one-day cricket, culminating in the appearance of Glamorgan at Lord’s in the final of the Gillette Cup.

True it did not end in a Glamorgan triumph, but with a proper sense of perspective Alan was right when he said that his team had achieved greatness to reach the final for the first time. Of course he was disappointed, but not so much for himself, but for the thousands of singing Welshmen who supported him at Lord’s. Yet his first words were of pride for the young Welsh members of the side.

Recognition of Alan Jones’s inspired leadership came immediately the season closed when he became the first winner of the Apex Trophy awarded with a cheque for £300 by a South Wales firm of industrialists to the player who had contributed most to the county in 1977.

On Rod Marsh’s birthday, read how the man once dubbed ‘iron gloves’ because of his lack of skill behind the stumps went onto become Test cricket’s most prolific wicketkeeper and a @WisdenAlmanack Cricketer of the Year in 1982.https://t.co/MgSzKPTxpj

Welsh-speaking Alan Jones was born on November 4, 1938, at Velindre, near Swansea, the eighth of nine boys. His father, a miner, who believed in the old fashioned Welsh way of life, was fond of all sport, and especially cricket. Indeed, Alan was cradled in the game from a very early age. All his older brothers played club cricket for Clydach or Hendy, and Alan played for the former club when he was only 15 years of age. In those days Clydach, like Gowerton and Briton Ferry, was one of the best cricket nurseries in South Wales.

Alan Jones certainly learned his cricket the hard way. In his early years he played with an improvised bat made by his father, who also laid a concrete pitch in a field near the Jones home, using wire from the chicken run for netting. Alan was only 15 when he first went to the Glamorgan indoor cricket school at Neath, where he came under the influence of the late George Lavis, who was the coach. Alan was then rather shy and small of build, but it was not long before it was realised that he had potential, and Lavis reported to his committee that “the boy has a quick eye, sure feet and courage.” He was stamped in the same short but solid mould as another great Glamorgan left-handed batsman – Emrys Davies. It was inevitable that Alan Jones should join the County staff, which he did in 1955. Soon afterwards he spent two years of National Service with the Welsh Regiment, and often played for the Army as well as Combined Services.

His cricket career as a professional began in earnest when he became a member of Glamorgan’s first team in 1960. Success did not come immediately. In his first match against Gloucestershire at Bristol he was bowled by Tony Brown for a duck, but soon he blossomed into a sound, reliable opening batsman, besides being a fluent stroke player. He always seemed capable of playing the type of innings the state of the match demanded.

In recent years he has had the added responsibility of shielding and shepherding the young players who came into the side. But his classical style of batting never suffered. His driving through the covers or past mid-on was a study in technical and co-ordinated perfection.

The extent to which Alan Jones has dominated the Glamorgan cricket scene is reflected in the number of records he has created. His aggregate of 26,590 runs surpasses that of any other Glamorgan player. His total of 43 centuries, 39 for Glamorgan, is again more than any other batsman. And on numerous occasions he has lost his wicket in the 90s – twice in successive seasons to Trueman when he was 99. Twice he has scored a hundred in each innings of a match – against Somerset and Yorkshire. He has reached 1,000 runs in 17 successive seasons, to beat the record which was held for so long by Emrys Davies. Also he has figured in two record partnerships – 320 with Fredericks for the first wicket against Northamptonshire at Swansea in 1972 and 238 with Tony Lewis for the second wicket against Sussex at Hastings in 1962.

There was one big disappointment in a crowded and colourful career. In 1970 he was selected to open for England against the Rest of the World, but fell to Procter for 5 and 0. He was never picked again although the records show that Len Hutton got 0 and 1 in his first Test*. Alan Jones was such a sound, dependable opening batsman that many thought he should have been given more than one Test.

His experience was broadened by a season with Western Australia in 1963 while he also toured East Africa. During the past few seasons he has spent the English winter coaching in South Africa. He is now the complete cricketer, a professional in the best sense. And with a few more seasons ahead of him there is no doubt that he will add to his achievements.

*England’s 1970 series against the Rest of the World was later stripped of Test status, and Alan Jones ended his career without an official England cap.