Rich Evans remembers Alastair Cook’s farewell century at The Oval when the England opener overcame the final obstacle in a humble quest for legendary status.

He may not have the tats, the flair, or the roguish, anti-Establishment attitude, but this was your definitive sporting hero seeking a finale that befitted the career and the occasion. A humble, amenable protagonist seeking completion, an innings that saluted the power of storytelling and the methodical construction of meaning.

England started the day with a 154-run lead and the series already seized, so the day was to be declared Cook’s Day – a hero bidding to morph from outstanding servant to undisputed legend. All that was lacking from a record-breaking career was a fairy-tale finish, with the opportunity of becoming only the fifth person to start and finish his career with a Test century. A nation was willing him on, as #ThankYouChef filled social timelines.

The sun was shining on what looked like a decent day for batting, and Cook presented the best version of himself – not crabbed, not meandering at one run an over, not overly reliant on that dab to leg. Joining him at the crease was the man who had replaced him as captain and batting lynchpin, Joe Root: a little meaner, a little wiser than the pup who made his Test bow under his partner’s leadership in 2012 against the same opponents in Nagpur. 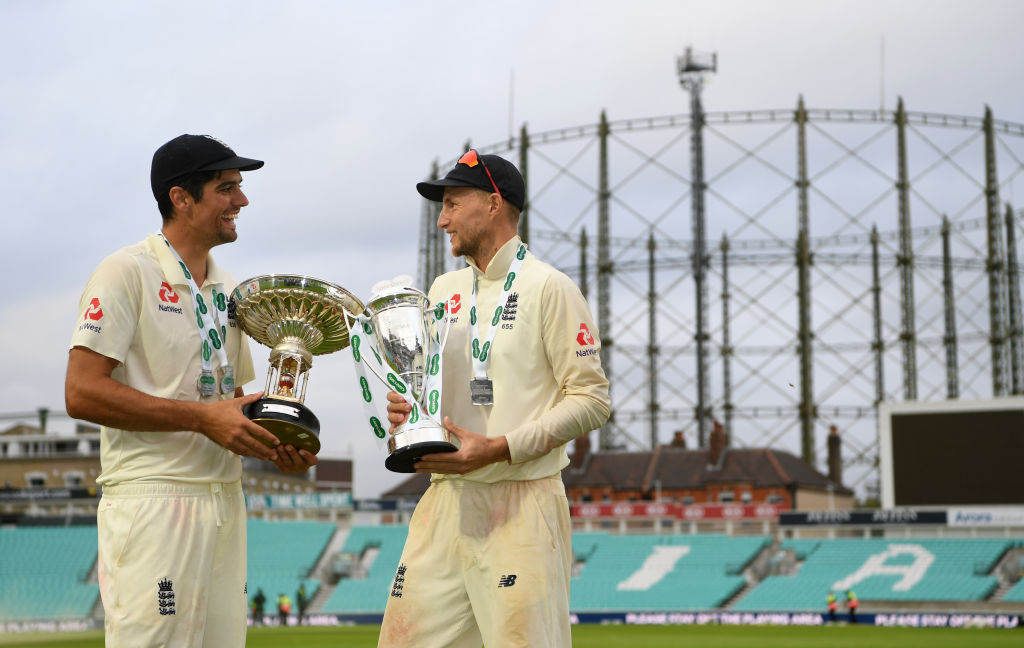 Master Chef squeezed a single behind square off Ishant Sharma, with the crowd roaring as if three figures had been reached already, before his 50 was brought up with a punchy whip off Jasprit Bumrah. It was his 58th half-century in 161 Tests, as he chased that career-capping 33rd hundred. Only Cook and South Africa’s Bruce Mitchell started and finished their Test career with twin fifties.

Root, having secured his half-century, hit a straight six off Jadeja, before Cook’s back-foot slash pierced the off-side ring, as England took it up a notch. Cook, now in the mid-eighties, stole a quick two in the leg-side before an exquisite straight-drive propelled him into the mid-nineties. The crowd appeared more agitated than the great man himself, and as Cook slowed, the ground hushed.

A single down to fine-leg made it 96 not out before an easy single to point, half-way back, edged him ever closer. Then, in trying to throw down the stumps, almost inexplicably, the return throw evaded the bowler and mid-on and sailed to the ropes. The ground erupted, spines tingled, and we all felt every ounce of Cook’s relief. 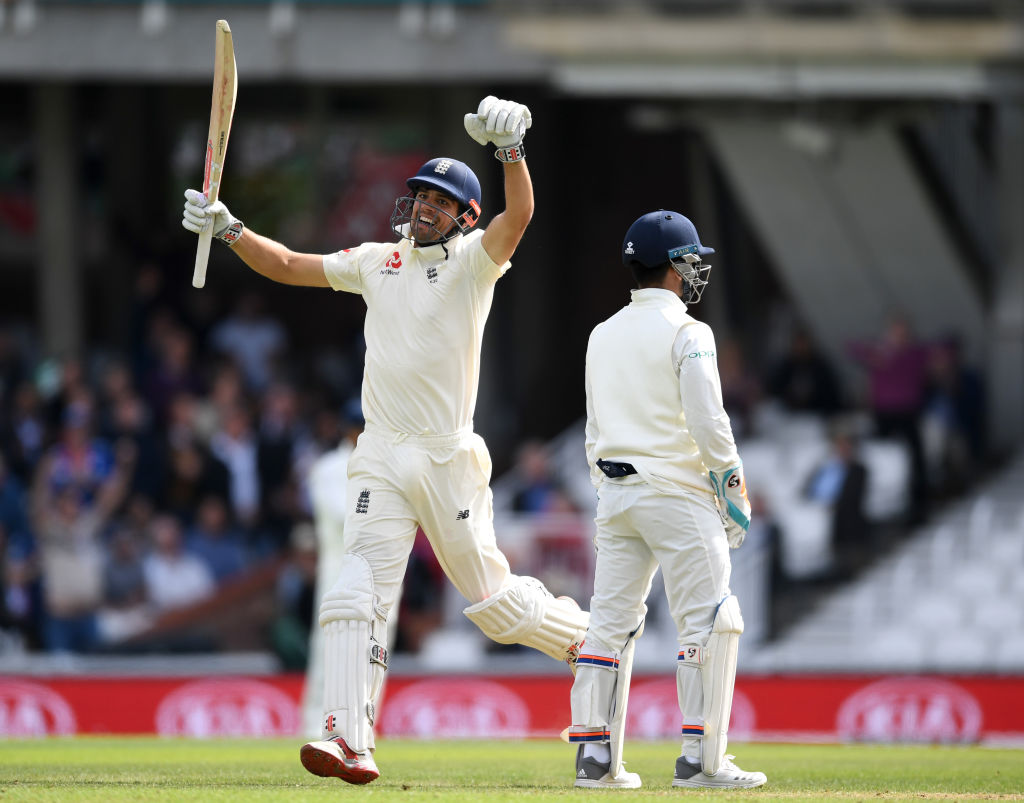 More reliant on strength of mind over any technical brilliance, there’s something heart-warming about the Cook archetype, someone who appears to require every sinew of muscle and brain tissue to compete.

It’s by no means a true underdog story, but he overcame his lack. Every character has a deficiency, a flaw, which provides hurdles to a state of completion. Not every pro cricketer gives the impression they were born with bat in hand like Virat Kohli or Joe Root, some have to graft more than others. This was a true master of his graft.

Physically and emotionally spent (only six men had played more Tests in the history of the game), you still got the impression this one was for his country and his adoring fans. No one has done more for English cricket in the last decade. No one has been more selfless and dignified in their brilliance.

Cook was forced to raise his bat for a second time, after the crowd refused to stop cheering after a lengthy initial raise of the blade. Everyone knew they had witnessed a special moment – the knighting of a legend (fittingly, he’s been hotly tipped to receive a Knighthood in the New Year).

England now led by 270 and what happened after his hundred was almost irrelevant. When Cook nicked off, the entire India team shook hands with the centurion, honoured to be touching gold. This was no lonely walk back to the dressing room, as Nasser Hussain said on the Sky Sports comms, “This time he walks off with the thanks of an entire nation.” 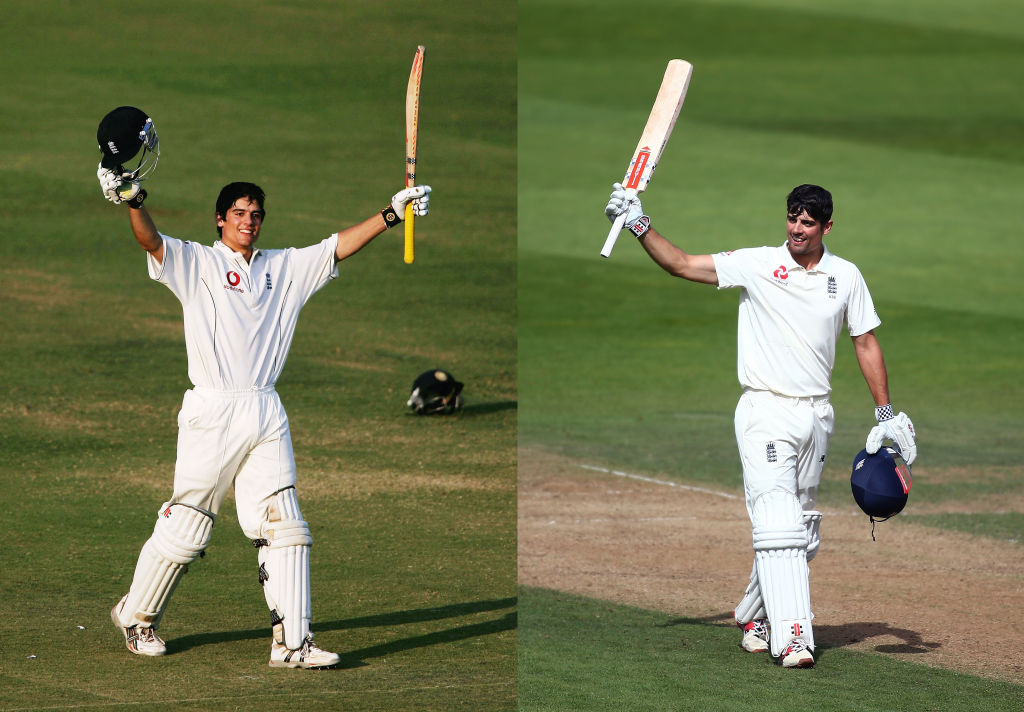 Cook became the fifth man – and only Englishman – to hit a hundred during his first and final Test match, joining Reggie Duff, Bill Ponsford, Greg Chappell and Mohammad Azharuddin. Like all powerful storytelling, you need an epic resolution, which links back to the beginning of the story after the ebbs and flows of the middle order. In devouring it, you conclude that this was the only possible ending – everything was building up to this moment. Nothing else would have been just. “I feel quite calm and as if a weight has been lifted off my shoulders,” Cook soon told the BBC. That day, Cook became complete, and we all became more complete for witnessing it.

No.5 on our list of Test innings of the year