Matt Thacker describes 2018’s ODI knock of the year – a magnificent battling century by Jos Buttler to haul England to victory over the Aussies and secure a 5-0 series win.

We had all seen Buttler hit one-day hundreds before. Five of them previously, each a masterpiece, an exercise in reading the situation, clear-headed thinking, ingenuity, brutality. The ramps, the straight sixes, the skimming drives dismissing searing yorkers to the extra-cover fence, the judicious placement and the quicksilver running between the wickets.

But each one had come in something of a run-fest, with Buttler having licence to go hard early. Sixty-one balls against Sri Lanka in 2014, 66 against New Zealand in 2015, an England record 46 against Pakistan the same year, 73 against South Africa in 2016, and a series-winning 83-baller against the Aussies in Sydney in January when England were in some trouble at 107-4. 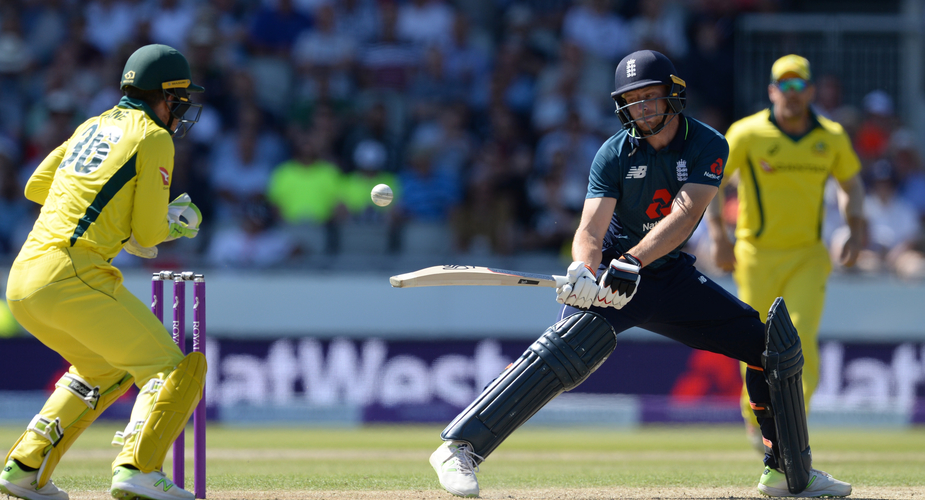 Buttler on his way to a sixth ODI century

And now, same opposition, same trouble. Well, more actually as, despite a 4-0 series lead, England were up against it, to put it mildly, as Buttler walked to the crease. Australia had managed just 205 in 34.4 overs of embarrassment that had appeared to put the seal on a depressing post-sandpaper series for them but Ashton Agar snared Jason Roy and Billy Stanlake’s pace had England on the ropes at 27-4. Over at the Nizhny Novgorod Stadium the other England had beaten Panama 6-1. An Australian victory would put something of a dampener on the day.

So Buttler walked out and just batted. Didn’t bother with the run-a-ball stuff, just nudged, nurdled, caressed, bunted. Alex Hales went for 20, which would be the second top score in the innings and England were 50-5. Moeen Ali and Sam Curran flickered briefly but when Plunkett was out it was 114-8 in the 30th over. Buttler was 47 not out and 92 were still needed.

One-day batting by a man at the very peak of his powers. A man who knows that if he is there, no game is ever lost

Buttler is joined by Jake Ball and, rather than steal a single off the final ball of the over, he hits the only six of his innings to bring up his hundred and leave five to win. Ball survives an over, Buttler gets it closer still, Ball survives again to leave our man to hit the winning boundary: 110 not out, 122 balls. One-day batting by a man at the very peak of his powers. A man who knows that if he is there, no game is ever lost.

Afterwards he said: “It was a very enjoyable innings to be able to play. It is a really great feeling hitting the winning runs and coming off winning games you don’t deserve to.” Too right.